Lightning Protection: Operations Down! Power Off! 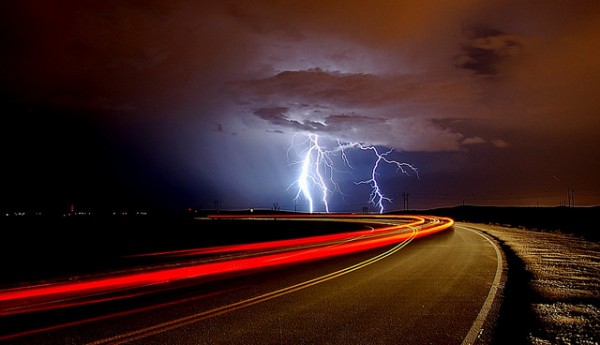 I am so thrilled to include yet another installment of Cheryl Cwelich’s road trip across the United States this summer for your entertainment and information. Some have remarked that this is not technologically pertinent, while I say, “observation is the best teacher.” One of the biggest issues that has been brewing across the globe is that places that have not previously experienced a tremendous amount of lightning in the past are starting to see more and more storms, which are much more powerful in nature. Observation enables us to be prepared. Seeing this from an outsiders perspective is equally as poignant and much more acceptable than hearing it time and time again from me, the LightningDiva@Large.

It was the fourth consecutive day of thunder and lightning in Taos, NM. The first day had been incredible. I was doing the tourist thing and walking around the plaza, looking at artwork and taking a ridiculous amount of pictures. Warm adobe, timber carvings, bright, alluring colors – Taos is a photographer’s dream. And then the rain came. A deluge flooded the narrow, winding streets of earthen walls and rough, wooden pillars. People scurried and scattered, disappearing into their Hobbit holes of the southwest. It was an insane amount of rain that came down. The thunder and lightning that accompanied it were even more intense. Boom after boom, flash after flash, rumbled through and shook the little town.

That had just been the first day. At first, it was glorious, all these afternoon storms rolling through, filling the sky with clouds of cinder and deepest, darkest blue and infusing the sage-scented air with rain. But on the fourth day, I stood under an awning at the Ojo Caliente Hot Springs looking longingly out upon the mineral-rich waters. They shone momentarily from a burst of lightning, and I wanted the thunder and lightning to stand down, for just for one day. New Mexico, however, is not to the place to go to if you want to avoid lightning. It is one of the top stormiest places in the US, experiencing around 70 lightning days in a year.

A couple of months earlier, lightning struck an oil tank in Roswell, NM that started a fire which burned the tank into the night and left it completely mangled and destroyed. Fortunately, in this instance, no lives were lost or injured. However, when lightning strikes an unprotected oil tank, tens of thousands of dollars are lost, if not millions. And this does not include the cost to clean up or rebuild. The firemen who respond to the scene can only watch to make sure that the fire does not spread, for trying to put out that kind of oil tank fire is just too dangerous. This happened just a few days ago when lightning in Baytown, TX ignited an oil tank fire. Again, the story repeats itself. And it continues to repeat itself in other states as well, states such as Kansas, Oklahoma, Louisiana and Arkansas, just to name a few. It’s not just New Mexico or Texas.

Oil tank fires represent a significant portion of lightning-related fires. According to the NFPA, there are approximately 22,600 fires ignited by lightning that local fire departments respond to annually. Of these, 50% of structure fires caused by lightning are to storage use property, which includes oil tanks, material storage, agricultural storage, etc. This is a major problem facing oil storage today. Protecting resources from lightning must become a top priority as sustainability and climate change become greater issues. Further, tank fires sparked by lightning erode company profits, a scenario that could be avoided. Standing by and watching the flickering tongues of a tank fire, is but to stand watching your money flicker and vanish; not protecting yourself and your company is not making good business decisions. It is to ride an implausible hope, like staying in a pool during a thunderstorm.

If you have any questions or need further information from Cheryl Cwelich please feel free to email her at Cheryl@substratumsolutions.com