If it’s Broken, it Won’t Work: Checking your Lightning Protection System is Essential!

Considering Lightning Protection as a Forefront to Construction

It is important to optimize operations as well as create business continuance plans in order to protect all telecommunications, broadcast centers, data centers, and 911 call centers from unexpected challenges – such as lightning. 911 Call Centers are the public’s first line of contact to public safety authorities in the event of an emergency. As emergency personnel, your community has their trust in you every day, especially through violent storms, and it is vital not to let them down. Damages can be costly to your facility and are lengthy to repair.  Having a business continuity plan in place to protect against internal and external threats, complete with how to continue operations and deliver services, is important for all public safety authorities. Protecting against natural disasters is difficult, but facilities can protect against lightning strikes by installing proper lightning protection and prevention systems.

Just last year a 911 call center in Anderson County, South Carolina was severely struck by lightning. This busy call center serves over 200,000 residents, covers roughly 780 square miles and answers over 500,000 emergency calls each year. During a small, short-lived  thunderstorm, cloud to ground lightning strikes were produced and hit the center’s two radio towers approximately two blocks away from the 911 call center. The lightning caused catastrophic damage to the phone and switch board, the radio console system and also injured a 911 dispatcher. All 911 calls had to be rerouted to an alternate Public Safety Answering Point (PSAP). The lightning fried servers and radio infrastructure resulting in an 80% loss – equivalent to nearly $3 million. Critical components of the network system were ruined and dispatchers were forced to work out of the backup 911 call center near the Anderson Regional Airport. In the end, Anderson county built a brand new facility, costing them $2.75 million dollars. Many emergency advancements were implemented in the new center- but no record of installing proper lightning protection can be found.

There are countless instances of lightning striking dispatch and 911 call centers. Just last week lightning hit the city of Naples, Florida dispatch center, forcing authorities to roll over all calls to a neighboring county. Information was then relayed back to the city for dispatching purposes. The same happened to a 911 call center in Bartow County, Georgia. Lightning knocked out power and forced operators to move to a temporary location using cell phones and portable radios to communicate with fireman and police officers. Several hundred emergency calls were also routed to a neighboring county for support.

Another instance occurred this month when lightning struck a 911 call center in Chickasaw County, Mississippi for the second time in three weeks. These two strikes temporarily disabled the computer, phone and radio systems. According to the Chief Deputy, the department has never had issues with lightning in the past. Chickasaw County had engineers examine the phone and radio systems to confirm they are grounded correctly and that surge protectors are connected to all systems.

As you can see, lightning strikes to Public Safety Answering Points can be vastly destructive. Thousands of dollars of equipment can be destroyed with one small lightning strike to the facility or a radio transmitter tower. Precious time is lost and reliability is compromised when calls cannot go through and must be fed through neighboring PSAPs, giving the public a troubling feeling. The only way to completely isolate a facility from a direct lightning strike is the Dissipation Array System™ by Lightning Eliminators & Consultants, Inc. (LEC). (DAS Pictured below) 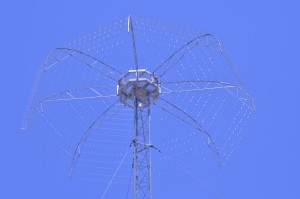 The DAS is a patented lightning-strike prevention system that bleeds off the induced potential on the protected area during the course of the thunderstorm, thereby reducing it to a much lower level in relationship to the surrounding environment. Unlike conventional lightning collection systems which are attraction systems, with the Dissipation Array, the lightning impulse is not encouraged, but discouraged. The DAS is designed to be completely effective in preventing all strikes to the protected area. Over the last 40-plus years, LEC has achieved over 99.7% reliability in preventing all strikes to the protected area. To date, LEC has installed over 3000 solutions in over 69 countries and throughout the United States.