Lightning Predicted to Increase by 50% by 2050- Oil and Gas Companies under High Alert! 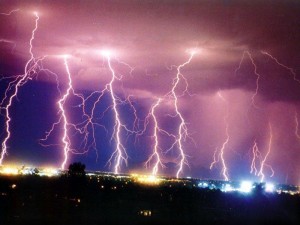 2012 topped the charts not only for the hottest year ever in the US., but also experienced many extreme weather events. The NOAA documented 2012 as the second-worst on a measure called Climate Extremes Index. These extremities are not only happening in the United States, but all over the world. Most areas of the world experienced higher-than-average annual temperatures, including most of North and South America, most of Europe and Africa, and western, southern, and far northeastern Asia. Just recently, Queensland reported over 25 fires caused by lightning strikes that have destroyed and damaged numerous buildings, houses and indigenous-owned homesteads.

With the weather more and more extreme more people are starting to believe that climate change is actually happening. Scientists in general have been in agreement that not only it is happening, it’s also going to cause an increase in lightning strikes. So now, more than ever is the time for assessing the risks associated with lightning strikes.

Lightning is one of the primary causes of business interruption and is more often than not attended to after the fact. Making a decision to protect your facility in hindsight can be very costly and in many cases have cost companies millions of dollars risk management and business continuance have become a high priority among businesses over the past decade. It it imperative that businesses take proactive measures to protect assets, increase stability, reduce downtime, and eliminate damages caused by lightning strikes.

At LEC we’ve studied the problems associated with lightning and designed a charge transfer system that utilizes the point discharge phenomenon that work so well a full no-strike warranty is issued to each and every client who purchases a system. Over time, the success ratio or reliability of the charge transfer point discharge system stands at 99.85%, with over 60,000 system years of data on over 3,000 installed systems.

Working in 70 countries and throughout the United States, LEC has implemented its proprietary DAS ™ solutions in addition to RGA ™  solutions for floating roof tanks across many industries like Petrochemical, Oil and Gas, Biochemical, Information Technologies, Nuclear Energy, Utilities and Manufacturing. LEC has worked with corporations, communities, governments and organizations worldwide.