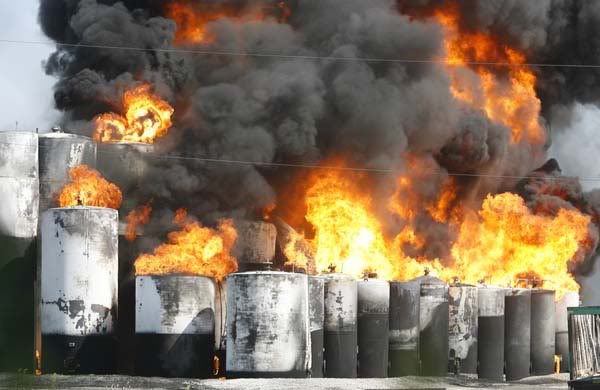 “Lightning is Mother Nature’s own explosive and unpredictable mega-Taser which can be deadly and destructive. Tank storage terminals
around the world: Pay Attention!”…The LightningDiva@Large

Writing this blog has allowed me to work with some fabulous publications over the past few years. One of these is Tank Storage. Recently I was asked to provide an article based on some of the blogs I have done over the past several months which covering lightning protection and tank storage. There are many different types of storage tanks throughout the Oil and Gas industry, as well as the Chemical Manufacturing sector. Different types of tanks are used throughout the process from exploration, to processing and through distribution.  Not all tanks are the same, nor is what they are storing, so the design and solution has to be different for each specific scenario.

Here is the article that was just published this month. Enjoy.

Whether downstream or upstream, oil and gas, chemical manufacturing or exploration, all companies storing volatile and combustible liquids should not only be considering risk mitigation plants for lightning protection, but implementing them. This includes both grounding engineering and surge protection.

A direct lightning strike is not the only issue to contemplate. While a tank that is hit by a strike is more than likely to explode, a strike which hits near a tank and is carried through the ground and/or pipes and wiring buried in the surrounding area can do as much damage.

Without proper grounding engineering or surge protection, the tank can still explode and critical electronics and operations impacted. This damage can be incurred immediately or in the future, if one factors in meantime-between-failure scenarios. Lightning is tricky and devious. The secret is not having it strike within an area that needs protection.

While it can be tracked, and storm cells provide advanced warning, it cannot be predicted where lightning strike. The odds of an individual getting struck by lightning in a year are about one in 775,000, according to statistics from the National Weather Service. This chance increases to one in 10,000 in a person’s lifetime.

Citing statistics like these, however, does not account for structures, nor can it. A structure has a much greater chance of being hit due to its composition and height, in addition to several other factors. But odds do not matter because once a facility is hit, it is too late. The cost of damage can easily soar into the millions of dollars and that is without taking into consideration regulatory fines, legal ramifications and the loss of life.

Lightning is on the rise

Last September the New York Times published an article, ‘Study sees a higher risk of storms on the horizon’. This article was based on a study by climate scientists from the universities of Stanford and Purdue, published in April 2013, entitled ‘Robust increases in severe thunderstorm environments in response to greenhouse forcing’.

In addition to these studies and reports, Lightning Eliminators and Consultants, a provider of integrated lightning protection and prevention products, solutions and services, has also noticed what appears to be a worldwide increase in lightning activity over the past two years.

More strikes were noted across the UK and Europe, while Australia became inundated with stronger, more deadly storms. Storms began occurring earlier and more frequently in locations along the US Gulf Coast; during April and May 2013 alone, three storage facilities were hit in nine days…read the full article

Thank you for visiting,