Lightning Protection: Exporting is as Risky as a Lightning Strike 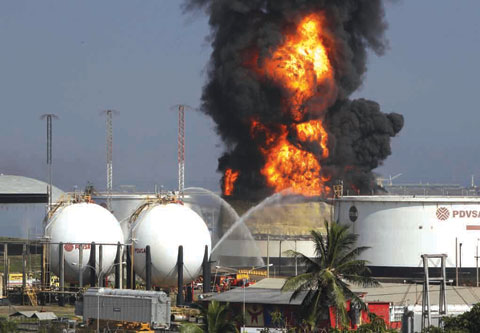 The DAS seen in this picture is far away from the tank that was struck by lightning.

No commentary on the unpredictability of our wild and wacky world would be complete without controversy. As you may or may not know Lightning Eliminators has a few critics who have attempted to defame us and/or labeled us a voodoo science. Columbus was not without his critics, when saying that the world was round as opposed to flat. Well neither are we.

The first bit of information one should know is, that for the most part, Lightning Eliminators nemeses are lightning rod suppliers, enthusiasts, engineers and/or scientists who believe in the lightning rod solution. They believe in collecting a strike whereas, we believe in preventing it altogether in a designated area. While we respect their right to have an opinion, what we do not respect is the way that a handful of individuals from this community choose to voice their objections. We on the other hand outline our differences in an LEC technical paper “Collection vs. Prevention”.  Our additional response to them is that it is not about right or wrong, it is about a difference of opinion based on science and what solution works best in a particular situation.  We feel strongly that inviting lightning into a volatile or sensitive environment is an unnecessary evil and one that should be avoided.

Lightning Eliminators has many more fans, supporters and customers than we have adversaries. Our solutions are based on science, engineering and physics and we have over 100 years engineering experience in-house and several scientists that work with us, who believe in our solutions, just like that of the lightning rod community.  Even so, these few individuals are fixed on knocking us every chance they get. Some a little more brazen than most, finding it necessary to facilitate negativity and misinformation relentlessly. So let me take a moment to put the issues out there, not in a disparaging way but to let you know what they are. In addition, I wish to clarify the misinformation which has been disseminated and challenge them to show me the facts. The incidents that have been referenced over the past year:

In a recent article written by Lightning Protection Institute (LPI) and distributed through the PR Newswire, in addition to posts on LinkedIn by Richard Kithil Jr., references to DAS and LEC were made as having responsibility for this unfortunate event.  The fact is that LEC has never had any products, DAS or otherwise, at the La Cruz Refinery in Venezuela.  Why we were included in his article or any posts is puzzling considering we have told the author and others repeatedly that we had no affiliations or solutions at this refinery. But, we are happy to report, that as of this past fall 2013, La Cruz Refinery commissioned our representatives LECVEN to do a survey of the facility to improve their lightning protection using LEC technologies sometime in the future as the solution.

Map Ta Phut is an industrial park in Thailand consisting of many companies and refineries covering many square miles. Recently through posts on LinkedIn from Richard Kithil Jr., it was stated that Lightning Eliminators (LEC/DAS) was responsible for this event. The incident took place at the Bangkok Synthetics Co (BSC), 29 people perished (not 12) and losses exceeded $1 Billion which led to the closing of the facility.  Lightning Eliminators has/had no products whatsoever at the site, company, facility and/or anywhere near the location of the lightning strike which occurred in May 2012.  We protect another company many miles away in the industrial park at an entirely separate facility owned by an completely different entity with no affiliation to BSC and we continue to do a substantial amount of business with the customer, who, did not get hit or experience any damage during the same storm.

This has been misreported by many based on a photo. The storage tank struck at El Palito was tank 170×5 which had no viable LEC lightning protection; the second tank 170×6 caught fire as a result of the explosion on the first tank, which lightning protection of any kind could and would not have prevented.  The LEC DAS which is visible in photographs circulated in the media, and which have been used to make negative claims against LEC, was not installed to protect the aforementioned tanks and had  even so, had not been inspected for over 13 years. Also, the DAS referenced was never intended to protect the equipment included in this particular incident. Any DAS installed to protect the pertinent tank which was struck, had not been inspected for over 18 years, since 1994. At the time of the strike, there was no lightning protection supplied by LEC protecting tank 170×5.  Both Lightning Eliminators and our representative in Venezuela, LECVEN, continually warned against potential failure in the event of a lightning strike, but the customer chose not to perform the necessary recertification and inspections recommended and knew of the potential risk.  Several of our critics continue to use this event as an example that DAS and Charge Transfer Technology do not work, yet, do not have any information, reports and have not spoken to the customer about the incident. Their claims are made solely based on a photograph.

If you look at this photograph do you see a convertible parked next to a van? Look twice. Photographs can be deceiving.  Thanks to our friends and Viralnova for an array of photographs which are misleading.

Is that a car parked next to the van?

For the record, both PDVSA and the El Palito Refinery are still highly valued customers of Lightning Eliminators and LECVEN. They still purchase our products and rely on our expertise. They have never held our company or our representatives responsible for what happened.  Although no official report has ever been released, it has been highly reported that maintenance was neglected for many years throughout PDVSA and the monies intended for maintenance redirected to social programs during the reign of Hugo Chavez.

In a nutshell, these are the incidents sited most commonly. All we ask is that you contact us for the real story or should you have any questions or concerns contact us directly. We will be happy to discuss the matter with you. We do know who these people are and realize that these folks want to sell you lightning rods and/or their preferred solutions.

Lightning Eliminators was founded in 1971 by Roy B. Carpenter, Jr., and still operates today under the guidance and supervision of the Carpenter Family in Boulder, Colorado, U.S.A. Roy Carpenter served as a Chief Engineer for NASA’s Apollo Moon Landing Missions and the Space Shuttle design engineering teams. To read more about the history of Lightning Eliminators click here

Stay tuned for Part Three, where I will cover standards and Lightning Eliminators Technologies. Please feel free to contact me should you have any questions or need additional information at LightningDiva@lecglobal.com