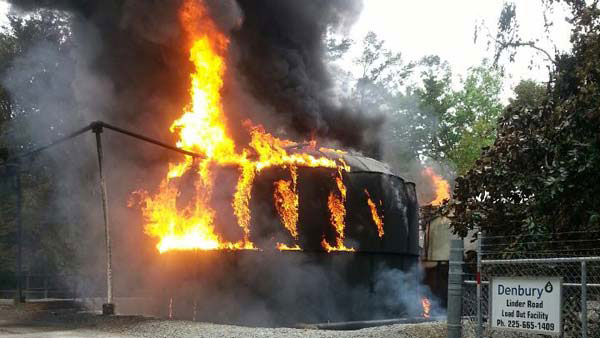 As I have remarked previously, I have the pleasure of working with some great people. One of them is Peter Mackay from Hazardous Cargo Bulletin.

The beginning of winter I went to HCB to see if they had any data on Tank incidents/explosions, especially those from lightning. Well they didn’t have any readily available data, however, Peter got wind of the request and agreed that the research was important. After he and I discussed, I suggested that perhaps this would make for a great article and the data would sure be helpful for us, so off he went and after several months, this wonderful article appeared.

Last summer, in the United States alone, I counted at least ten fires due to lightning at either Tank Farms or Tank Batteries.  It has been reported that lightning is increasing and becoming more volatile. In addition, we have more and more storage facilities being built every year. So is it the weather patterns shifting or the fact that they have more targets to hit? Perhaps it is a combination of the two. Regardless, it is certain that lightning protection is a more and more a necessity, not a luxury any longer.

I would like to thank Peter for taking the time and allowing us to share with you the fabulous piece.

INCIDENT ANALYSIS The sight of a storage tank full of oil on fire is enough to strike fear into most firefighters’ souls. But how often does this really happen, and what causes tank fires? HCB does some digging:

The Bulletin’s monthly Incident Log regularly carries reports on storage tank mishaps. Indeed, an analysis of the record from the start of 2001 shows that there have been just over 850 such incidents reported around the world – roughly five or six per month. A little more than half of those – 439 – involved fires or explosion, the sort of accident that can cause injuries and deaths as well as property damage.

The period between 2004 and 2008 appears to have been the high point of storage tank incidents (see Figure 1); perhaps the economic downturn that started in 2008 reduced activity in the energy industry around the world to the point where less product was moving and so there were fewer opportunities for accidents.

However, readers should be cautioned about the data; the Incident Log is compiled largely from primary sources – mainly press reports – that appear in the public domain at the time of the accident. As such, its coverage relies on the availability of such reports. In countries where there is a vibrant local press and effective news aggregators, the ‘incident count’ is likely to be higher. Language also provides a barrier to some extent. Furthermore, it cannot be ignored that some cultures regard minor property damage and environmental pollution as unremarkable events that are not worth reporting.

That being said, it should come as no surprise to find that the US accounts for the majority of the storage tank incidents reported – 538 out of 852, or some 63 per cent. Not only is the US a large country with a significant onshore oil sector, it also has local press activity across the country and lacks any government interference in the reporting of accidents.

By contrast China, with a comparable land area and a much larger population, reported only 36 storage tank incidents between 2001 and 2013. Unlike the US, China has no local press to speak of and those reports that do make it into the public domain come largely through the official channel of Xinhua. Having said that, it has been noticeable that China has become more open in its reporting of industrial accidents and there is a growing awareness on the part of the government and the public of the importance of reducing environmental pollution.

In order to make any meaningful analysis of the incident record, then, it is better to concentrate on the US, which offers a more representative sample.

A first analysis (see Figure 3) looks at the broad causes of storage tank fires, leaks and ruptures. Based on initial reports, the cause is not always known or not specified at the time; further research would be required to eliminate most of those shown as ‘unknown’. However, excluding those 110 incidents, there are clearly five main causes:

• Equipment failure (20 per cent), mainly related to valves and gaskets;

• Structural failure (18 per cent), involving the collapse of the tank itself or part of the tank or roof; • Lightning strikes (16 per cent), which impact in particular oilfield tanks in remote locations;

• Operational failure (15 per cent), relating to improper actions on the part of site personnel, such as a failure to follow procedures; and

Each of these areas can be addressed quite simply, either by putting in place better systems for inspections and maintenance work, including the replacement of ageing equipment, or by better training, especially for contract workers. There are also systems available on the market to reduce the likelihood of a lightning strike causing a fire…read more

Thank you for visiting,