A Charge Transfer System™ (CTS™) is a system intended to prevent a lightning strike from occurring within a protected zone or area. The CTS collects the induced charge developed by thunderstorm clouds from a designated protected area of the earth and transfers this charge through the ionizer into the surrounding air. The process whereby a sharp point immersed in an electrostatic field transfers charge from the ionizer into the air is known as point discharge. The resulting ionized air molecules form a mixture of charged and uncharged molecules known as space charge, which acts to form a shield between the storm cell and the site. The resulting difference in electrical potential between the protected site and the storm clouds is reduced thereby delaying the formation of an upward streamer from the protected site and preventing direct strikes. 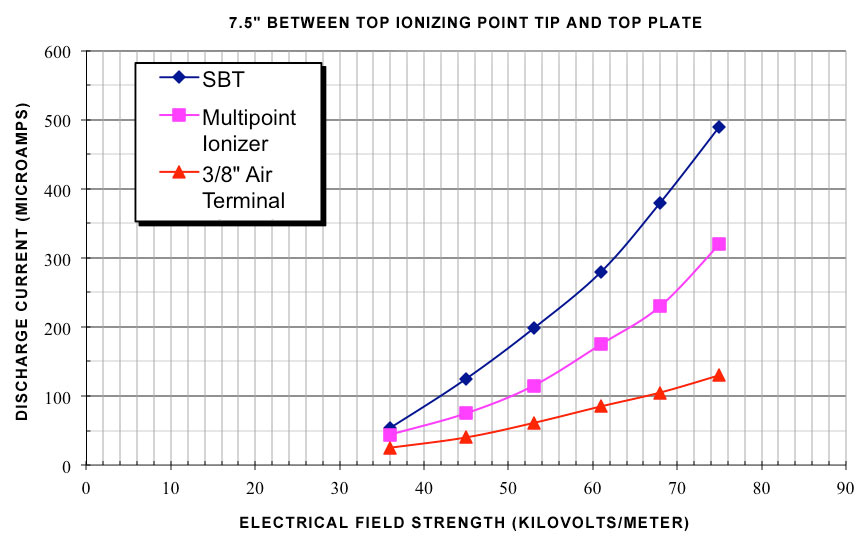 The CTS consists of one or more ionizers, down conductor, and charge collector, as described below.

Depending on the CTS design objectives, the charges transferred to the air can act in one of two modes as follows:

All LEC lightning prevention products, discussed below, function as CTS.


A Spline Ball Terminal™ (SBT™); is a single multipoint ionizer in the Charge Transfer System (CTS) family. Because it is designed with a limited number of ionizing points on the unit, it falls into the collection of CTS operation. If the number of points were increased significantly and distributed effectively over a larger area, it may be classified in the prevention of the CTS. A comparative test was conducted to illustrate the greater ionization capability of the SBT (CTS) with proper point spacing over a single ionizing point air terminal and a multipoint ionizer with close ionizing point spacing.

The SBI®, SBT®, DAS®, IPG®, and CTS® are Patented Products & a registered trademark of Lightning Eliminators & Consultants, Inc. in the United States of America.