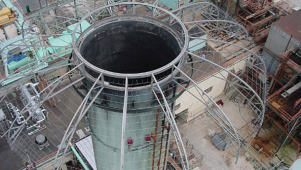 Though lightning rods are the oldest form of lightning protection and still used today, in the past few decades advancements in technology have provided more options. Two major types include the Early Streamer Emitter (ESE), similar in approach to the lightning rod, and the Charge Transfer System (CTS), which takes a completely opposite approach to lightning protection: attraction versus prevention. A type of CTS, the Dissipation Array ® System (DAS®), works to prevent a lightning strike in a specific area designated for protection.

When it comes to lightning protection, a common misconception is that the different types of solutions available are variations on the same technology. This is not necessarily the case—though the process may rely on the same natural phenomena, the result is entirely different. Although the lightning rod is the most commonly known form of lightning protection, there have been a great number of technological advances since the days of Benjamin Franklin. In addition to the antiquated technology of the lightning rod, two newer technologies are the Charge Transfer System (CTS) and the Early Streamer Emitter (ESE) air terminal. In reality, although both of these products are used for lightning protection, contrary to the public’s understanding, they are very different. An ESE is a similar technology to the lightning rod, while DAS is an entirely different type of technology. The only similarity is that all three initially operate off of the same scientific principal or phenomenon, known as “Point Discharge.” However, their actions diverge; the rod and ESE move toward streamer generation whereas the CTS utilizes a slow discharge process. Understanding the differences between these technologies is important. For example, it might not be ideal to attract lightning in areas that are highly volatile or indispensable, but instead to prevent it from striking altogether in an area most important to protect. While lightning rods and ESE attract lightning, CTS prevents it from terminating in the area of protection.

What you will learn:

The Formation and Effects of Cloud to Ground Lightning

To better understand these different products and their approaches to lightning protection, it is first important to have an understanding of how lightning forms. During a storm, naturally occurring electric fields gain strength in the atmosphere. As the storm builds, paths of ionized air, known as stepped leaders, form and head toward the earth in a sort of stepped pattern. The electric field between the leader and ground intensifies as the leader descends, causing oppositely charged ions from the ground (or from buildings or trees, etc.) to group together, forming multiple “streamer” paths that head up toward the sky. When the leader connects with a streamer, a lightning strike forms. This natural phenomenon is unpredictable, and there is no way of knowing which leader-streamer connection will form.

Lightning strikes more often than many people realize. According to the National Weather Service, lightning strikes worldwide about 100 times per second.1 Many of these strikes are harmless, but others can cause catastrophic damage. For example, in Kansas City in 2008, a storage tank holding 1.2 million gallons of gasoline caught fire after being struck by lightning, resulting in a $12 million loss. A similar incident in 2012 in East Malaysia resulted in a $40 million loss.

The strike is only part of the problem. The secondary surges that radiate outward from the ionic channel can also cause damage. When these surges pass over conductive elements such as electrical wires or metallic pipes, the result may not be fire and explosions, but it can lead to the destruction of electric appliances and motors as well as more delicate electronics. Though private home insurance claims for lightning strikes are down, the total paid out by the insurance industry has gone up—largely because of the sensitivity of common electronics to these surges. Ubiquitous electronics such as video game consoles and smart phones have led to an estimated additional $1 billion in insurance losses.

However, the effect of direct lightning strikes on industries such as oil and gas is at an incomparable scale to these individual losses. Potential damage comes not only from direct sources such as the loss of product and tanks as in the Kansas City and Malaysia examples (through destruction and fire), but also from downtime. For example, an ExxonMobil facility in Singapore lost nearly a day of work each week before installing lightning protection, due to crew members being forced to safety zones when the region’s lightning alarm activated. In the Dominican Republic, lightning strikes caused a mine to lose the equivalent of 40 hours per worker per month. Other incidences include loss-time-events for offshore oil rigs and power generation stations where sensitive electronic systems were damaged. Downtime ranged from hours to months with loss of revenue ranging from a few thousand to millions of dollars.

A cost-benefit analysis taking into account these risks is what often leads industry decision-makers to implement some method of lightning protection. However, lightning protection itself has been around for a long time, which you will learn about in the next section.


The History of the Lightning Rod and Early Lightning Protection


The basic form of lightning protection that many people are familiar with is the lightning rod. When Benjamin Franklin first experimented with electric charges in the 1700s using a kite, a key, and some string, he originally proposed that lightning rods could reduce or eliminate lightning by relieving the imbalance between clouds and the ground.2 However, he later realized that if the conductive metal rod was struck by lightning, then it worked to safely conduct lightning to the ground. In other words, the initial confusion was an issue of prevention versus attraction. It turns out that Benjamin Franklin was correct, and prevention is indeed an option for lightning protection—but the technology would not be available for another 200 years.

Lightning rods do not prevent lightning, but instead essentially “collect” it. They attract strikes and convey the energy to the ground rather than to the building or structure that it is protecting. Lightning rods have been used for more than 200 years, mounted to the tops of buildings and electrically bonded to the ground, able to reroute lightning strikes away from important structures as a preferred strike point. They have served a good purpose, and over the years have protected many structures from the physical effects of a direct lightning strike, such as fire.

However, particularly in the past 40 years, new technologies have developed to protect against lightning—including one that takes the prevention approach that Franklin originally envisioned.

More similar to the conventional lightning rod, ESE systems are lightning attractors. However, according to their manufacturers, they are designed to trigger the early initiation of upward streamers, which increases the efficiency of lightning attraction as a way to extend the effective range of protection far beyond that of lightning rods. ESE air terminals can typically be distinguished from ordinary lightning rods due to the presence of a small object near the top, a discharge trigger, and they also can be more geometrically complex. This discharge trigger increases the probability for initiating a “streamer” discharge at or near the tip of the rod when an ionized “leader” approaches. Increasing the probability of streamers and leaders meeting is how ESE systems serve as improved lightning attractors. According to the National Institute of Standards and Technology, it is difficult to judge ESE performance: “It is nearly impossible to make quantitatively meaningful statements on the relative performance of ESE devices and conventional Franklin rods. In fact, sufficient reliable quantitative data on the performance of conventional rods seem not to exist.”3

Unlike lightning “attractors,” CTS is specifically designed to prevent a lightning strike from terminating where it is not wanted—in a designated area of protection. This is the only system in which lightning strikes are actively discouraged, rather than encouraged. CTS technology is based on existing physics and mathematical principles. As noted by IEEE engineer Donald Zipse: “Proof of lightning rods’ effectiveness lies mainly in empirical and anecdotal evidence. CTS technology, however, is based on existing electrical and physical formulas and mathematical basics.”4

In order to prevent lightning from striking within a specified zone, a CTS collects the induced charge from thunderstorm clouds within this area and transfers it through an ionizer into the surrounding air, thus reducing the electric field strength in the protected zone. The resulting reduced electrical potential difference between the site and the cloud suppresses the formation of an upward streamer. With no leader-streamer connection, the strike is prevented.

DAS is a specific type of CTS invented and produced by Lightning Eliminators & Consultants, Inc (LEC). Using a CTS “zone of protection,” a DAS is able to completely isolate facilities from a direct lightning strike by bleeding off the induced charge in the protected area during the course of a thunderstorm, reducing it to a much lower level in relationship to the surrounding environment. When the naturally occurring electric field in a protected area is reduced, the upward streamers are suppressed and do not get enough energy from a storm to connect with downward leaders—thus, no lightning.

In one study that LEC conducted at a customer site, electric fields inside the protected area during thunderstorms were, on average, 55% weaker than those in the surrounding area. Tri-State Engineering, which installed DAS in the 1990s, has had its system checked and re-certified by LEC on schedule. They have never had another direct lightning strike in the protected area since installing a DAS.

Conventional lightning rods and ESE have one major aspect in common: they attract lightning. ESE terminals arguably differ in effectiveness—an ESE terminal is equipped with a device that increases the probability that an initiated upward streamer will connect with a downward leader. Increasing this probability means that lightning is more likely to strike the terminal rather than unwanted areas.

However, CTS offers an entirely different approach than either of those technologies: the key difference is one of attracting versus preventing lightning strikes. The approach is essentially the complete opposite. Rather than encouraging the attraction between streamer and leader, a CTS discourages it, thus preventing the formation of lightning strikes in the protected area as opposed to collecting them.

This fundamental difference can be key for industries such as oil and gas, midstream storage tank farms, and energy producers of all types. These facilities often have many flammables and other sensitive materials where using an attractor carries the risk of ignition or damage to electronic systems. As Zipse points out, “Is it wise to allow thousands of amperes to flow near sensitive electronics equipment, especially when charge transfer systems are available and can prevent strikes in protected areas?”4 However, this is also true for any operation that would have little tolerance for downtime. A single strike of lightning, or even a secondary surge, could restart the “Days since the last downtime event” clock. By utilizing prevention rather than attraction, CTS is the best option for facilities where a single spark could be catastrophic. LEC’s Dissipation Array System (DAS) is the only commercially available solution for creating this zone of protection that guards against a lightning strike.