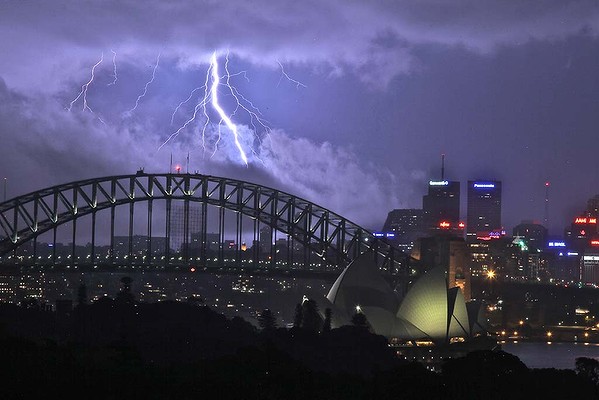 There is no doubt about it; Australia has its lion’s share of lightning!

In the past several years Australia has been a hot bed for storms, fires, explosions which have all been caused by lightning. It seems during the Southern Hemisphere Summers, you do not go a week without reading about some lightning related accident. Not only have there been numerous lightning related stories coming from Australia, the most famous in the past few months, was the Australian Open, were players ran for cover to escape the violent lightning strikes. In addition, increased references to Australia’s lightning plight have frequented cyberspace and the media showcased in this piece by the IEEE “Illuminating the Dangers of Lightning Strikes” and another article by the Adviser “50,000 lightning strikes electrify SA – readers send in amazing thunderstorm photos from around Adelaide”. The list goes on highlighting Australia’s heat wave combined with increased lightning and the destruction it is reaping all over Australia.

Over the past few months I have worked with the LEA team and learned quite a bit about the business of lightning protection in Australia, most interestingly, is that the Oil and Gas industry is considered part of the mining industry; which after thinking about it makes total sense if one thinks about how oil and gas are produced. Recently Lightning Eliminators Australia was featured in this small piece in the Australian Mining Review which we include here for your information. We welcome our associates from Australia and look forward to a long relationship with both the company and the Country.

Lightning protection for Australian mines a stroke of genius
As seen in Australian Mining Review, March 2014

LIGHTNING strikes on mine sites are a primary cause of dangerous and expensive fires, and are far more common than many people realize. Parts of Australia that do not normally experience a large number of lightning strikes are being hit more often, and regions that usually see major storms and heavy lightning are being hit much harder and for much longer. Ensuring reliable protection from a lightning strike is essential for the high-risk, high-value, high-fire-load environments often associated with mining operations.

Traditionally, the lightning strike protection and prevention industry relied upon old technology lightning rods and early streamer emission technology for protection, but both have a major failing: they rely on collecting a strike – effectively inviting it into the facility being protected.

Now available in Australia and New Zealand through the Brisbane-based division of Delta Fire Australasia, Lightning Eliminators Australia, these unique solutions combine lightning protection, grounding and earthing and surge suppression technology that creates isolation zones that inhibit both direct strikes to protected sites, and minimizes the effects of nearby strikes. The technology complies with the latest Australian and international standards and codes.

Three thousand Lightning Eliminators custom-engineered dissipation array systems are now installed around the world – equating to more than 40,000 systems in service per year – and the success of these unique direct lightning prevention solutions is self-evident. Since its launch, this system has maintained a success rate of more than 99%.  Visit Lightning Eliminators Australia’s new website www.lightningprotection.com/Australia to learn more about Lightning Protection Solutions in Australia