Lightning Protection: Precarious or Proactive — Which are you?

Fires involving petroleum storage tanks are far more common than one might think. Approximately one-third of all tank fires are known to be caused by lightning (several more, are most likely due to lightning, but never reported). Floating roof tanks (FRTs) are especially susceptible to lightning.

To combat the risk of rim fires, the industry has been using metal strips called “shunts” that electrically bond the shell and roof of the tank. Unfortunately, the bond that these shunts establish is unreliable and creates a greater risk of sustained arcs due to:

Around 2003 the American Petroleum Institute (API) created a technical committee to evaluate this situation and to recommend solutions. As a result, the API has issued a document entitled API RP 545, Recommended Practice for Lightning Protection of Above Ground Storage Tanks for Flammable or Combustible Liquids, which is expected to integrated into the standard in the future(still pending to date) .

In this paper from 2009 “Improving Lightning Safety of Petroleum Storage Tanks” Joe Lanzoni, V.P. of Engineering Sales for Lightning Eliminators outlines the findings and recommendations of the committee’s efforts in more detail. However, the two most substantial findings are as follows:

Furthermore, in 2008/2009 the API released this statement in an update:

Per NFPA 780 (Lightning Protection Code), shunts are required to be installed on floating roof tanks above the seal at 3 meter (10 feet) spacing around the tank perimeter. The purpose of these shunts is to provide a conductive path from the tank roof to the tank wall. Tests conducted for the API RP 545, “Lightning Protection for Above Ground Storage Tanks”, task group have shown that these shunts can generate showers of sparks during lightning strikes. If there is a gap between the seal and the tank wall during a lightning strike and if a flammable mixture is present, a tank fire may result. 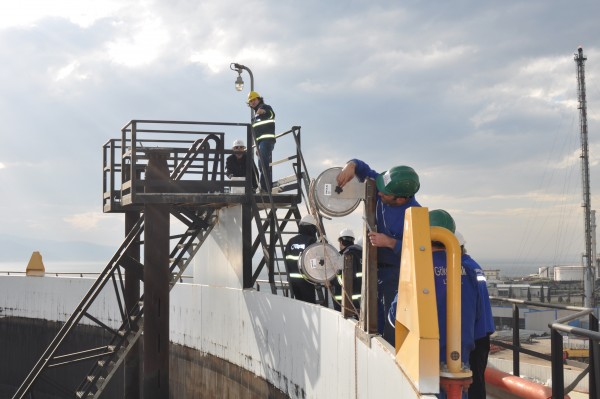 Shunt pulled away from tank.

Since the best defense against lightning is a tight seal, this reinforces the need to conduct routine seal inspections and maintenance. Also, access to tanks should be restricted when there is a potential for lightning.

The API RP 545 task group is planning to conduct additional tests in order to evaluate alternative methods of providing a conductive path between the tank roof and the tank wall to meet the intent of NFPA 780. The test results and recommended mitigation measures will be included in a new RP 545 – “Lighting Protection for Above Ground Storage Tanks” (expected publication date: mid 2008). The test results with bonding conductors should be available in early Fall 2006 and the test results for under-liquid shunts should be available in early 2007. For more information, please contact Gordon Robertson at API, 1220 L Street NW, Washington, DC, by Recommended Practice 545, Lightning Protection for Aboveground Storage Tanks, 2nd edition”

In an answer to this issue the committee made several key recommendations one of which is to “Install bypass conductors between the roof and shell no more than every 30 meters around the tank circumference. These bypass conductors should be as short as possible and evenly spaced around the roof perimeter.”

FRT’s are especially vulnerable to the direct and indirect effects of lightning. A direct or a nearby lightning strike will cause electrical currents to flow across the tank shell and roof. When these lightning currents arc across the roof/shell interface, they can ignite any flammable vapors that may be present. It is therefore necessary to bond the roof and shell to prevent arcing at the roof/shell interface.

Substantially reducing the risk of sustained arcs requires a reliable, full-time, low- impedance and low-resistance connection between the tank shell and roof. Additionally, the connection must operate regardless of the tank shell’s condition.

The RGA is not affected by the condition of the tank because the RGA and cable are bolted and sealed to optimal locations on the tank shell and floating roof. When properly applied, multiple RGAs on each tank provide low-impedance pathways to safely discharge lightning currents.

Since its inception, the RGA has been optimized several times to meet the demands of an ever changing industry, new substances and new technologies. With the most recent version, the RGA 750 being released in the spring of 2015, not only does it meet all the recommendations and comply with API 545, it also meets the recommendations of the aforementioned technical committee. It is ATEX approved and conforms to NFPA 780. In addition, it is pre-tensioned at the factory, so no on-site tensioning is required; it uses new aluminum cable which greatly improves corrosion resistance and is highly resistant to hydrogen sulfide (H2S). Not to mention, it is designed with stronger springs to retract the cable, resulting in an average increase in retraction force over the entire cable payout range of 340% over the RGA 75 and 600% over the RGA 55. 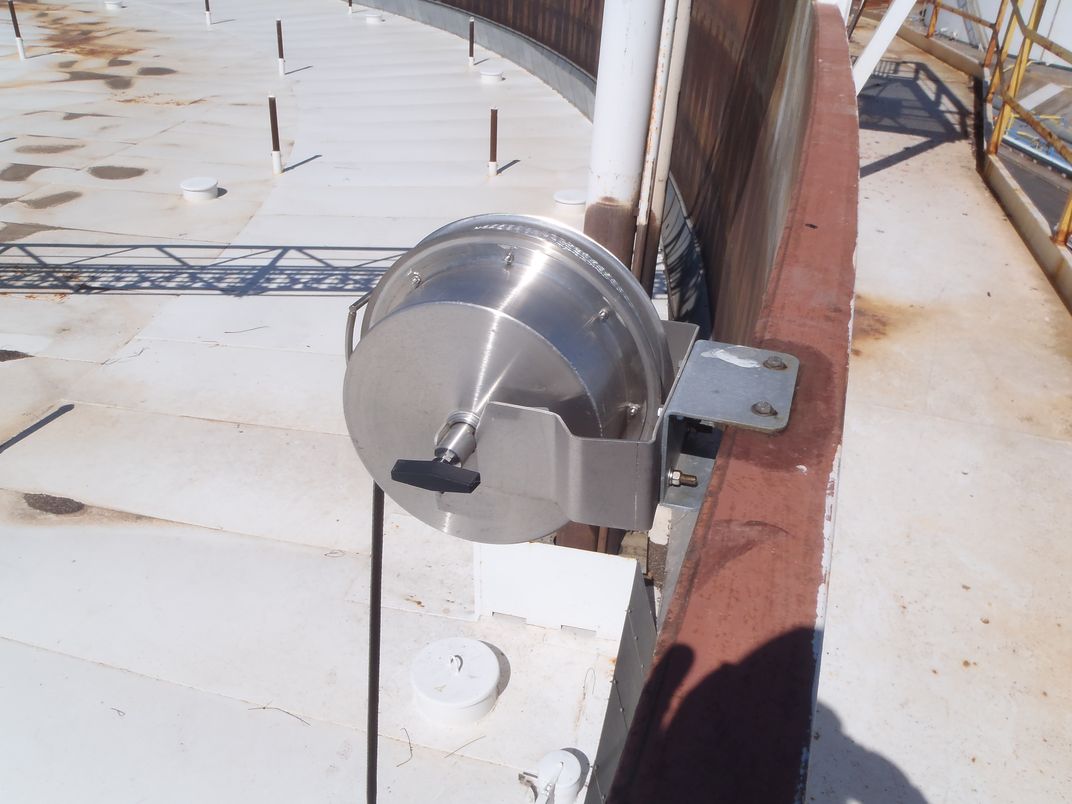 The RGA substantially reduces the risk of tank fires by subduing sustained arcs during events and other electrical phenomena. The RGA does this better than other traditional methods for bonding floating roofs because the retractable cable is always at the shortest possible length. The resultant is low resistance and impedance results in too low of a voltage to sustain the arc, i.e., no fire…learn more