Lightning, is one of the primary causes of facility failure, shut-down and loss across multiple industries globally today. In the next 50 years lightning is predicted to increase substantially.

Since its invention, man has been using the lightning rod as the preferred means of collecting a lightning strike. This technology is almost 300 years old and its use may result in devastating side effects.  Collecting a strike has cost many companies millions of dollars in damage to sensitive electronics, in downtime and loss of product.

Why would you want to collect a strike when you could prevent one altogether?

Understanding how lightning works helps us better understand how we can prevent a strike from terminating. Simply put, during a storm a charge builds in the cloud, eventually generating a step leader which descends from the cloud. In reaction, streamers are launched from ground-based objects. The two connect and a strike is formed.

In 1971 Lightning Eliminators releases first patented products using charge transfer technology, known as a Dissipation Array System, or DAS, to prevent a strike from occurring within a protected area. It was designed with better industrial facility protection in mind.

This is accomplished by employing an array of points made from engineered metal wire, giving a maximum amount of corona discharge per point while avoiding streaming mode. 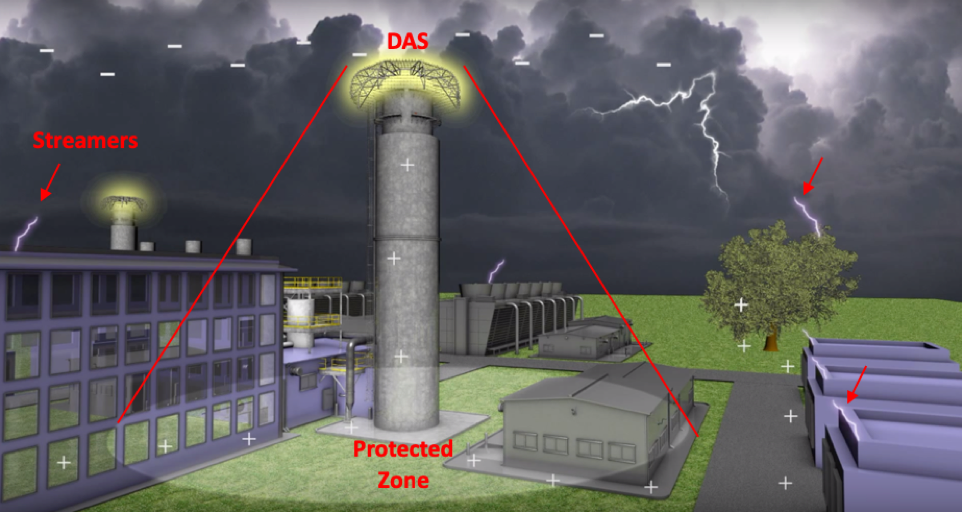 The array requirements and size are calculated by the geometry of the site and other parameters such as structure type and integrity.

Since the invention of DAS, Lightning Eliminators has continued developing cutting-edge products for lightning protection, grounding and surge created solely with one purpose in mind; protecting industrial facilities from the devastating effects of lightning as comprehensively as possible.