The End of the Franklin Rod Era 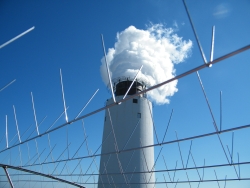 The repressed economy created a number of challenges for new industrial plant construction during the past several years. Rather than build and expand, businesses in many industries are squeezing out excess capacity from their existing manufacturing plant networks.

For the construction industry, this resulted in an upswing in the types of renovations that enable plant consolidation. However, once consolidation commences, the remaining plants have little—if any—way to accommodate unscheduled downtime. The risk profile for businesses combining their plant activities can change significantly once redundant facilities are taken out of service.

Consolidation renovations merit a closer look at the damage lightning can cause in terms of productivity disruption. Companies that do more with less are maximizing capacity utilization with risk assessment precautions that take downtime out of the equation.

Lightning Is Unpredictable and Damaging

Direct lightning strikes and their secondary effects are some of the most harmful natural occurrences because they can occur anywhere and hit any object. For many companies, the effects of even one direct strike are too much to bear and can result in the loss of tens of millions of dollars. The potential damage and losses lead many businesses to assess and manage their risks with comprehensive lightning, surge and grounding protection services and products.

Saltwater disposal (SWD) facilities for oil and gas are at an especially high risk because they help companies maintain productivity in their overall energy exploration activities. After one oil company lost millions of dollars of capital equipment when it took a direct lightning strike at an SWD facility, it made lightning protection equipment part of its construction plans for new facilities. Beyond the costly effects of equipment damage, the company realized its storage facilities holding large volumes of oil in the process of being sold were at risk of explosion, fire and significant losses of saleable product.

Lightning protection also can be an important feature in nuclear plant construction projects. One nuclear energy facility suffering from repeat lightning strikes spent $50,000 per incident in ancillary equipment to meet government requirements—a trend the company reversed through the use of lightning protection systems.

When looking beyond the potential for physical damage to its sensitive electronic systems and fleet of aircrafts, one logistics firm located in a part of the country that experiences about 50 thunderstorms a year considered the costs of diverting work to alternate facilities if the main building was rendered inoperable from a lightning strike. After a risk assessment, the company installed systems and equipment to prevent lightning termination and protect day-to-day operations. Aided by technology that discourages lightning strikes, the company has not had a lightning incident in more than three decades.

Thorough risk assessments should incorporate an accurate measure of secondary lightning effects. While a strike on its own is bad enough, a resulting fire opens the door to a host of other issues that must be considered. Large fires can negatively impact the environment, and toxic materials create an additional hazard to firefighters and others in the area when they catch fire. Those same toxins, once carried into the air, create a corrosive problem when returned from the atmosphere (similar to the effects of acid rain).

Even the water used to extinguish fires is affected, as runoff from fires typically is polluted with the fire-retardant chemicals used to control a blaze. If chemicals or other toxins are engulfed in a fire, they too will appear in water runoff. As a result, firefights often pose serious risks to nearby freshwater habitats.

New Thinking for a Warming World

Given this trend, businesses that are consolidating their activities can expect to face even greater risks at plants in which downtime is a costly luxury.