A Team-Building Session to Help Protect the World From Lightning

Some companies don’t wait for lightning to strike 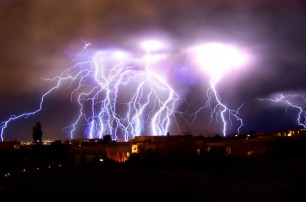 Featured on the front page of the Houston Chronicle and on FuelFix.com

Back in Ben Franklin’s day, no one worried about lightning causing a chemical tank to explode or shutting down the electronic controls to a nuclear reactor.

Technology has raised the stakes since Franklin invented the lightning rod – lightning-sparked fires caused more than $1 billion in insured homeowners’ losses in 2010 alone, according to the Insurance Information Institute.

The costs can be even higher for the oil and gas industry; a 2006 study published in the Journal of Loss Prevention in the Process Industries found lightning strikes are the most common cause of accidents involving storage tanks at refineries and petrochemical plants.

“For the guys who’ve been around for 30 or 40 years, it’s not if, it’s when they’re going to get hit,” said Matt Jones, project manager for Ashley Automation & Technology, an industrial electrical firm that works mostly in the oil fields. And while lightning is hardly the only risk for oil and gas production and other facilities, it’s a big one, said David Miller, director of standards for the American Petroleum Institute.

The fact that the institute first issued standards for protecting facilities against lightning in 1953 and has updated them seven times since then is evidence of the concern, Miller said.

In the lower 48 states, the risk is highest in Florida and lowest along the West Coast. The Houston area receives more lightning strikes than anywhere else in Texas, according to Richard Orville, a Texas A&M professor who established the National Lightning Detection Network.

The lightning rod is still the most commonly used protection around the world, updated with modern materials but still based on Franklin’s design from the 1700s. Jones said there is also growing interest in a decidedly more modern technology as companies try to protect themselves from the elements.

Roy Carpenter was an engineer for NASA contractor Rockwell International when he came up with a different way of guarding rockets against lightning.

Lightning rods work by drawing lightning and sending the charge through a conducting wire into the ground. Carpenter’s system aims to prevent a strike altogether by disrupting the electrical charge, essentially making conditions less favorable for lightning to develop.

After leaving Rockwell, Carpenter started the company that is now Lightning Eliminators & Consultants.

Roy Carpenter died in 2007, but the company is still in business, based in Boulder, Colo. Carpenter’s son, Peter Carpenter, is chairman of the board.

While the system has its skeptics, energy companies make up a growing share of its clientele.

“Twenty years ago, it wasn’t as big a deal, but now oil and gas plants are so technical,” company president and CEO Avram Saunders said. “Lightning rods attract lightning and send it into the ground. If you had a multimillion-dollar facility, would you want to attract that much energy?”

Saunders said several companies along the Houston Ship Channel use the system, including some units at Exxon Mobil Chemical’s Baytown plant. The company did not respond to requests to discuss the system.

The Tennessee Valley Authority installed the system over a portion of its Browns Ferry nuclear power plant in Alabama in 1999 and will use it at another nuclear plant now under construction, said Rick Brehm, the authority’s program manager for electromagnetic interference and instrumentation and control systems.

Brehm said the authority chose to add the protection to a 600-foot-high stack, camera towers and guard towers at Browns Ferry, areas that previously had been protected by lightning rods but still had been damaged by lightning.

“When we lose security equipment, it’s not just the dollars of the equipment, but having to staff security officers to cover the area, so we were paying personnel costs as well as equipment costs,” Brehm said.

An internal study tallied lightning strikes within a 500-meter, three-mile, six-mile and 120-mile radius of the stack for the three years before and after the system was installed.

In the years after the installation, lightning strikes within 500 meters of the stack dropped by 80 percent, Brehm said, while they held steady in the wider area. He said there’s no sign the stack has been struck by lightning since the system was installed.

But such studies have done little to sway some in the lightning protection mainstream, including Bud VanSickle, executive director of the Lightning Protection Institute.

Peter Carpenter has heard all the criticism.

He was a child when his father designed the charge transfer system as a Rockwell engineer on the Apollo program. The rockets launched from Florida, making lightning strikes a constant worry.

“It seemed odd to him that they were using technology that went back to Ben Franklin to protect men going to the moon,” Peter Carpenter said.

Jones said much of the current oil field expansion is funded by private investors, who are more concerned about protecting gas processing units, oil drilling pads and other investments from lightning strikes than major oil companies may have been in the past.

“They don’t want to lose their $5 million to a lightning strike,” he said. “They see it (lightning protection) as an insurance policy.”