Some companies don’t wait for lightning to strike 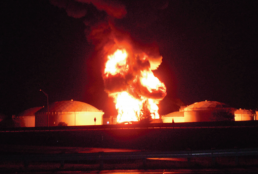 According to a review of petroleum storage tank fires between 1951 and 2003, the number of tank fires reported in the worldwide media is in the range of 15 to 20 fires per year. The extent of the tank fire incidents varies considerably, ranging from a rim seal fire to multiple, simultaneous full tank fires. Of the 480 tank fire incidents reported, about one-third are attributed to lightning. Another study, sponsored by 16 oil industry companies, found that 52 of 55 rim seal fires were caused by lightning, and concluded that ‘lightning is the most common source of ignition.’

There are two ways in which a lightning strike can ignite a stored petroleum product:

1. A direct strike to the storage tank containing the petroleum. (This is the worst case.)

2. A strike terminating near the storage tank, thus subjecting the tank to the indirect effects of the strike.

If a lightning-related current encounters an electrical discontinuity and arcs from one conductive surface to another, and flammable vapours and oxygen are present at the arc location, the vapours may be ignited if the arc is sustained for more than about 5 milliseconds. The duration of a typical lightning strike is well in excess of 5 milliseconds.

Conventional lightning protection methods for tanks include the following:

1. Install lightning masts around the tank.

2. Install air terminals on the tank.

4. Install conductive shunts between the roof and tank shell (for FRT’s).

5. Ensure the tank is well grounded.

Methods #1, #2 and #3 are based on the premise that the protective element will collect the incoming lightning strike and divert the energy to ground. Unfortunately, there are two undesirable consequences of these conventional methods:

1. Occasionally the protective element will fail to collect the strike, and the strike will terminate directly on the tank. (This is a worst case scenario.)

2.These methods do not eliminate the root cause of ignition, which is current flow across electrical discontinuities, such as the roof-shell seal on FRT’s.

Regarding method #4, API funded testing proved that shunts will produce arcs during lightning events, even if the shunts and internal tank wall are clean. Regarding method #5, the sheer size and weight of a tank creates an excellent connection to earth, and so adding grounding electrodes to a tank is not effective. Further, whether or not a structure is well grounded does not determine whether or not it will be struck by lightning.

Electrical field strength inside and outside of DAS protected area

The API RP 545 committee invested substantial resources into directed research and testing. Two of the key findings from the test programme were that current flows on Frt from nearby lightning strike (1) When lightning current passes through shunts at the roof-shell interface, it will result in arcing under all conditions; and (2) it is the slow component of the lightning stroke which ignites flammable vapours. Therefore, when the slow component of a lightning stroke passes through any roof-shell interface, if flammable vapours are present they will likely be ignited. As a result, API RP 545 recommends three major modifications to FRT’s:

1. Install submerged shunts between the roof and shell every 3 meters around the roof perimeter, and remove any existing above-seal shunts.

2. Electrically insulate all seal assembly components (including springs, scissor assemblies, seal membranes, etc.), and all gauge and guide poles, from the tank roof.

The worst-case scenario for a petroleum storage tank is for a lightning strike to terminate directly on the tank. Considering that an average lightning strike contains about 30,000 amperes and that the 95th percentile of all strikes contain 80,000 amperes or less, there is plenty of current available at the strike terminus to create undesirable arcing. If the arcing occurs in a location where flammable vapours and oxygen are present, the vapours will be ignited. Even if the tank is a closed system or is fully compliant with API RP 545, the consequences of vapour ignition from a direct strike are too great to risk.

The Dissipation Array System (DAS) is a lightning strike avoidance system that will minimize the risk of a strike terminating on the protected structure. The DAS continuously dissipates the charge that accumulates during a thunderstorm, leaving that structure without significant charge. Measurements of DAS performance made by customers have shown that a thunderstorm’s electrical field strength, as shown in Figure 2, can be substantially reduced by a DAS, thus discouraging upward streamers being launched from the protected structure.

The DAS uses an electrostatic phenomenon called ‘point discharge’ to transfer the charge from the site into the atmosphere. Point discharge is the phenomenon that occurs when a sharp grounded point is exposed to a strong electrostatic field. Current flow via point discharge increases exponentially with the increase in field strength. When large amounts of ions are produced, it creates a shielding space charge usually recognized as corona. The DAS creates massive ionisation during a thunderstorm, thereby constantly discharging the protected area and eliminating the condition that creates upward streamers.

Because conventional lightning protection methods do not eliminate the direct and secondary effects associated with every lightning strike, they are not adequate to protect petroleum storage facilities. For petroleum storage tanks with floating roofs, it is imperative that they be made compliant to API RP 545. Bypass conductors between the roof and tank shell on FRT’s should be of the retractable type, to provide the lowest possible impedance between the roof and shell. To eliminate direct strike concerns, a DAS should be installed on the structure to prevent the worst-case situation – a direct strike terminating directly on the picture caption to come tank –from occurring.