Grounding Rod Can Save Your Life 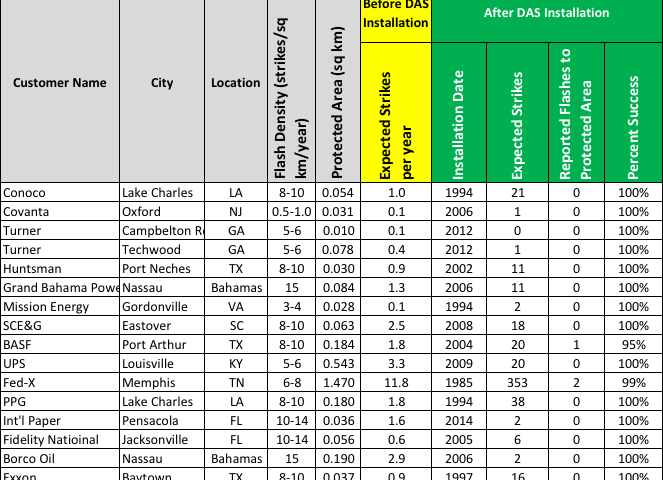 For over 40 years LEC has been providing Lightning Protection solutions by installing Dissipation Array Systems (DAS) to prevent lightning related damage to sites varying in size from a single tower to an area close to 1.5 square kilometers.

Some sites are in an area where there is a range of yearly strikes to a square kilometer; such as 8 – 10 strikes per square kilometer per year.  For analysis purposes, the greater number in the range was used as the flash density.

The chart below summarizes the success that DAS has had over the years in our largest installations.  The summary includes the following facts. 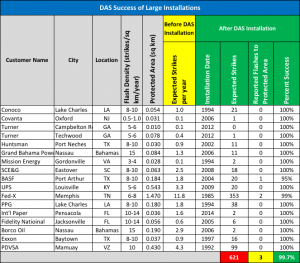 The calculations of the protected area are based on a well maintained and inspected DAS.  Where there have been reported strikes to the protection area, this paper provides comments on the site as well as the condition of the DAS or unusual circumstances that led to a degradation of the ability of the DAS to function as originally designed.

This site was originally protected in 1985 and has been modified numerous times as the Federal Express hub footprint has grown.  As the hub has grown, the location of some of the airplane gates have changed with Federal Express moving them as required.  Usually LEC is notified about these gate changes when they happen.  LEC has always been advised to the addition of new buildings.

Because of this lag in installation of gates and construction of new buildings there have been two reported lightning events at the site.  Each report has been investigated and found that there was no direct lightning strike to the protected area.  The ensuing investigation found that the system had not been fully functional due to bonding, grounding or maintenance issues.  The satisfaction of Federal Express with the LEC designed lightning protection system is evident by their continued use of the system as the Federal Express package delivery system expands.

There have been no reported direct lightning strikes to the protected area since 2005.

Using the analysis method described above, the attached table is of the largest sites LEC has protected from direct lightning strikes since 1985.