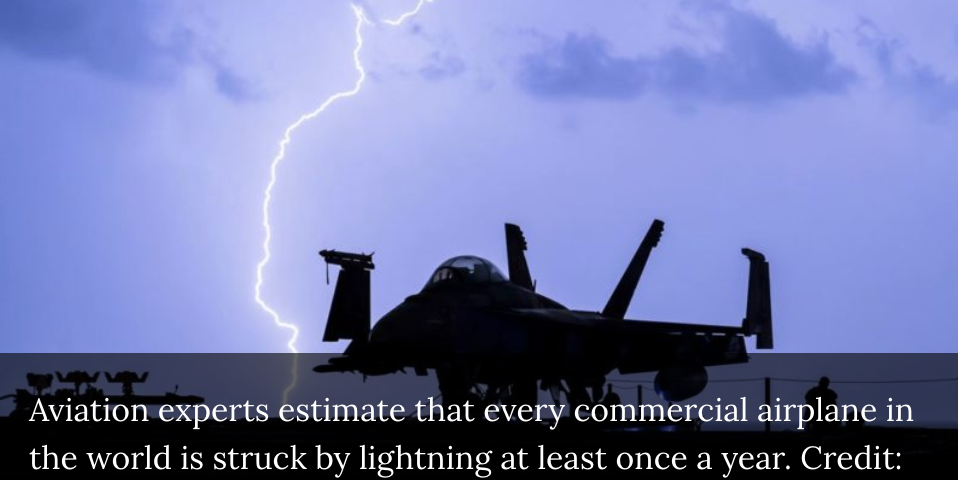 The text below is summarized from an article by Robert Scammell for Air Force Technology.

Engineers from Massachusetts Institute of Technology (MIT) have proposed electrically charging an aeroplane’s exterior to reduce the chance of them being struck by lightning.

The team found that if a plane were charged to just the right level its likelihood of being struck by lightning would be significantly reduced.

The theory, initially suggested by research sponsor Boeing, was tested conceptually through modelling.

The team developed a simple model of an aircraft-triggered lightning strike, showing how the outside of a plane becomes polarised when flying through an electrically charged environment such as a thunderstorm.

Channels of highly-conductive plasma, known as ‘leaders’, flow from opposite ends of the plane and eventually out toward oppositely charged regions of the atmosphere.

“Imagine two channels of plasma propagating very quickly, and when they reach the cloud and the ground, they form a circuit, and current flows through,” said team member and assistant professor Carmen Guerra-Garcia.

“These leaders carry current, but not very much,” added fellow researcher professor Martinez-Sanchez.

“But in the worst cases, once they establish a circuit you can get 100,000 amps, and that is when damage happens.”

The researchers suggested temporarily charging a plane to a negative level to dampen the more highly charged positive end. This would prevent the positive end from reaching a critical level and initiating a lightning strike.

“We’re trying to make the aircraft as invisible to lightning as possible,” said co-author and head of MIT’s Department of Aeronautics and Astronautics professor Jaime Peraire.

To emit the negative charge, a plane would be equipped with an automated control system comprising sensors and actuators fitted with small power supplies.

The sensors would monitor surrounding electric field and then actuators would emit a current to charge the aircraft to the appropriate polarity.

Researchers say this would require power levels lower than a standard light bulb.

“Aside from this technological solution, we are working on modelling the physics behind the process. This is a field where there was little understanding, and this is really an attempt at creating some understanding of aircraft-triggered lightning strikes, from the ground up,” said Peraire.

Aviation experts estimate that every commercial aeroplane in the world is struck by lightning at least once a year, with around 90% of these strikes likely triggered by the plane’s electrically-conductive exterior.

Despite this, lightning itself poses very little danger to passengers inside the well-insulated cabin of an aircraft.

However, an aircraft that has been struck by lightning requires follow-up inspections and safety checks that may delay its next flight, with severe damage taking the aircraft out of service indefinitely.

The results were reported in the American Institute of Aeronautics and Astronautics Journal.