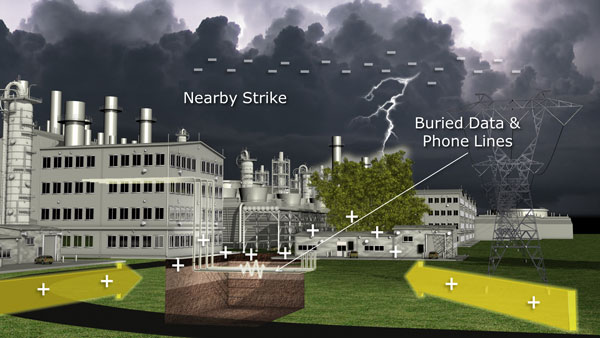 As promised, here is Part III in the “Misspelled, Misunderstood and Manhandled Series.” I have asked two of my associates to contribute to this and have decided to yet split it one more time into 2 parts, because each part covers different aspects of Standards and how they apply to Lightning Eliminator’s products and technologies.

Part One focuses on the controversy and misunderstanding about standards in general and how the customer should be applying or not applying standards to solve their problems. Primarily what does or does not apply, or for that matter, what should apply when considering a lightning protection solution.   Part Two is more directly related to the Lightning Eliminators product line and what is appropriate and/or not appropriate for the end user to consider when choosing a Lightning Protection System. The LightningDiva@large

You Have Choices- Standards Best Practices

Most applications that I see in the United States in which a specification is provided include NFPA 780 and UL96A.  It is almost as if it is “boiler plate”. I believe many people think that this is mandatory; that there is no alternative. The thought process may go like this; “If I don’t follow these standards, I will not have any recourse or somebody to go after if I have issues with lightning”. But who are you going to go after if you do install a UL96A system and pay to have it certified on a regular basis? NFPA? UL?

You could attempt to go after the company that designed it, installed it, or did both. But they will tell you they followed the standard. What more do you want them to do?

I get calls from companies, such as power generation plants, chemical plants and data centers, that tell me they have issues with lightning. It amazes me the number of times when I investigate these sites and perform consultations and site surveys, how many of these facilities have a “certified” LPS system already installed. They even have a UL Master Label plaque attached to some structures in the facility.

LPS Standards Cover the Old: Not the New

First off, let’s discuss what the NFPA 780 and UL96A have in common: Franklin Rods, lightning rods, air terminals. A brief history and description follows.

In 1755, Dr. Benjamin Franklin experimented with lightning mitigation. He found that a sharp point dissipates charge (fundamental of a charge transfer system or CTS).  He linked lightning to a charge and attempted to dissipate the charge in the clouds during a thunderstorm. Because of the experimentation he did with these “lightning rods”, they became known as Franklin Rods, utilized in a Franklin System which includes the necessary grounding and hardware to make them work. He found that if the lightning rod was the preferred collection point of the lightning leader, he did discharge the entire static field uncontrollably, with thousands of amperes of current flowing through the conductor in sub-second durations. The lightning rod isn’t always guaranteed to collect the lightning, which is another problem.

These Franklin Rod devices were applied to protect livestock and people from direct lightning strikes by providing a “preferred collection point”. That is: lightning would strike a metal rod attached to a structure suspended above the “protected” area, and a ground wire would (hopefully) conduct the excessive lightning currents to earth ground. Because the Franklin Rods were physically attached to the structures, in many cases, the structure would actually burn or sustain damage.

In today’s world, this approach brings the severe lightning energy (a 50-percentile strike in the U.S. is 30,000 amps) too close to critically sensitive, sometimes explosive environments and the susceptible electronic systems that control and monitor these environments. Even if the collection or lightning “strike” does not directly contact a portion of a system or circuit, the secondary effects of lightning (earth current transients, atmospheric transients, secondary arcing, electromagnetic pulse or EMP and ground potential rise or GPR) can degrade system components leading to premature failure and possibly cause false or erroneous operation.

Lightning Eliminators and Consultants, Inc. (LEC) does not follow the traditional approach of lightning protection by providing a “preferred lightning-collection point”. The Franklin Rod systems that have been in existence for over 250 years create the problem. They attract lightning to an area when the lightning may have well terminated outside the desired safe zone. In our view, they create a potential problem where one might not have occurred.

For over 40 years, LEC has been providing advanced lightning protection systems worldwide. The systems LEC designs, manufactures and applies do not provide the traditional Franklin Rod protection schemes. Rather, we take the view we should avoid the strike, not collect it.

LEC’s name is somewhat of a misnomer; LEC does not eliminate all lightning. LEC’s charge transfer system (patented as the Dissipation Array System® or DAS®) uses a naturally occurring, scientific phenomenon called point discharge to retard the collection of lightning within a finite protection zone. LEC does not attract the lightning. LEC’s system lowers the static field in the protected area long enough for the lightning strike to terminate outside the protected area. The DAS is engineered to the specific application or site.

The typical clients who choose the DAS system for their facility lightning protection are those that cannot tolerate any collection of lightning within the desired protection zone. The operation of the protected facility is too critical or sensitive to take the chance that a strike will be collected such as a physically explosive environment or where downtime will be too costly. Others choose our approach because the initial downtime will cause an extended restart period for repair and system checks or processes that are interrupted by the initial lightning strike cannot be reset and will require disposal or waste that cannot be reused. Another strong reason to choose DAS is personnel safety in an area that must be occupied during storm activity such as surveillance and security availability. These are a few of the mission-critical issues that have caused our clients to choose LEC’s unique patented approach.

With over 53,000 system-years of actual in-field operation and proven success in minimizing the effects of lightning, LEC is the smart risk-reduction choice for critical systems’ lightning protection.

You have choices in how you protect your assets. The current standards in NFPA and UL96A Standards in lightning protection are not mandatory. Contact us to discuss what your options are.

You can reach Brian Daugherty at BrianD@lecglobal.com

As always, if you have any questions please feel free to contact the LightningDiva@Lecglobal.com

Stay tuned for Part II on Standard from Joe Lanzoni next week, which will discuss Lightning Eliminators Products inline with Standards-you will learn all you need to know and more.