The Billion Dollar Question | Lightning Protection…can you afford not to? 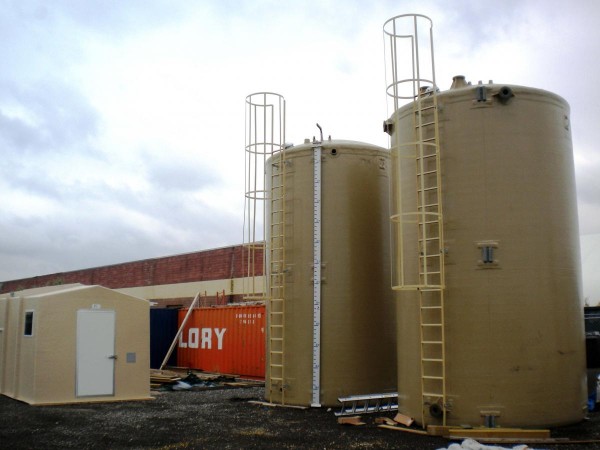 I have watched and listened as this problem has become increasingly troublesome for many storage tank facilities.  Finally somebody is paying attention and has come up with a solution. So please welcome The Lightning Protection Blog’s, guest blogger, Dr. Al Gasiewski, co-author of “Chemical Storage Tank Arc Discharge Mitigation”

Over the past several months my LEC colleague, Lee Howard, and I set out to research and conduct testing regarding the issue of explosive detonation of non-metallic chemical storage tanks. These tanks are heavily used in the petrochemical industry, and lightning-induced explosions of them have become a more common and dangerous problem. What we determined is important for storing combustibles using these types of tanks. To reduce the risk of an explosion it is suggested that some form of electrical discharge hardware within and around the tank should be considered as a means of developing a comprehensive lightning impact mitigation plan. In doing so it is important to understand the physics of lightning-induced charging of and electric fields within non-metallic tanks, along with the most effective and safe means of discharging and protecting such tank.

Background: The problem of electrical discharge and subsequent explosive detonation of the ullage inside chemical storage tanks containing methane-infused fluids is becoming more widespread as the use of new non-metallic storage tanks proliferates. Such tanks are typically made of non-corrosive but otherwise insulating materials (either fiberglass resin, PVC, or similar insulating plastics), have no continuous metallic grounding conductors within or outside of the tanks, and are exposed to the electrical environment in the vicinity of lightning-producing thunderstorms. They are often used to store fluids used in hydraulic fracturing. The gas inside the tank above the fluid level (the tank’s ullage) can contain a stoichiometrically explosive mixture of oxygen and methane or other similarly volatile hydrocarbon gas. Such a mixture is amenable to explosive detonation upon either arc or strong corona discharge within the tank.

Conventional metallic tanks form a Faraday cage of conducting material around both the fluid and potentially explosive ullage, thus ensuring that electric fields never approach appreciable values within the tank. However, the lack of a continuous conducting boundary resulting from the use of non-metallic tank walls permits electric fields to approach breakdown strength in response to a nearby lightning discharge. Furthermore, depending on the specific conductor geometry, enhanced local electric fields that exceed breakdown strength can occur near either small metallic objects or even dielectric objects within the ullage region of the tank. Such conductors include small boltheads or other metallic fasteners, as well as other electrically good conducting materials within the tank (e.g., including droplets of the fluid itself and the fluid surface corners). Enhanced fields at sharp conductors can occur during either the incipient or active phase of a nearby lightning strike, but gaseous dielectric breakdown and subsequent ullage ignition will likely only occur during a nearby strike event.

Since the fluid inside the tank is often laden with salts, it can be expected to be of moderate to high ionic content. As such, its conductivity can range from a low value of ~0.001 S/m to values for heavily brackish water that can easily exceed a few S/m. Such fluids have relaxation time constants of less than ~1 nsec, but for low saline contents (i.e., spring water) this time constant can be as long as ~1 μsec. In either case, these fluid masses behave as good electrical conductors on the time scale of an atmospheric electrical transient, and thus redistribute surface charge throughout their volume rapidly during the nearby strike event. The transient produced by this event is thus effectively shielded by charges on the fluid surface and does not manifest itself within the volume of fluid itself…read more