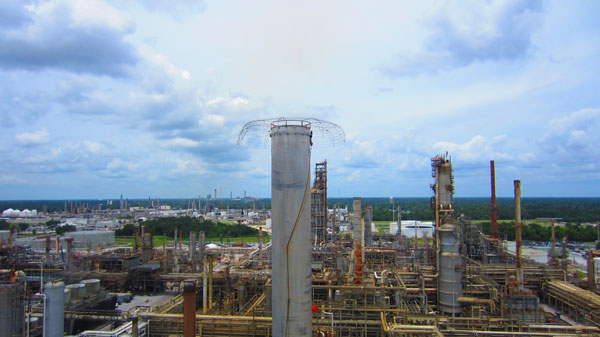 This week I am posting the article which I wrote for Tank Storage Magazine’s January Issue — While we are getting ready for the spring in the Northern Hemisphere we need to think about our lightning protection. Now is the time to review, maintain and inspect or else…The LightningDiva@Large

If You Could Prevent a Disaster, Why Wouldn’t You?

There are hundreds of thousands of terminals worldwide that are susceptible to loss, damage and destruction by lightning. Millions of dollars can be gone in a matter of seconds. Lightning events can halt production instantaneously, sometimes for hours, impacting a company’s bottom line. A strike can explode volatile substances, start fires, take out electrical systems, and/or destroy or degrade equipment, which was meant to last for years. In addition, lives can be lost and the environment irreparably damaged, which leads to liability, potential fines and sanctions.

When lightning strikes and causes an explosion or ignites a fire, it opens the door to a host of issues that must be considered. The obvious ones are death, destruction and loss of assets. Large explosive fires, of any sort, can have a negative effect on the environment. In addition, when toxic materials catch fire, they create an added hazard for employees, firefighters and residents who live in the area. Those same toxins, once carried into the air, create a corrosive problem – similar to the effects of acid rain when they come back down out of the atmosphere. Not to mention the effects on the air we breathe and the land or water surrounding a facility.

In addition to the risk of explosion or fire are the secondary effects of lightning, such as a power surge through the ground. This poses a threat to expensive technology that keeps machines and sensitive equipment running, and could result in unpredictable downtime. In some instances, a strike to the ground nearby can destroy significant amounts of electronic equipment without sparking a flame, which is called meantime-between-failure, leading to unplanned replacement costs and impeding production. Many manufacturing facilities have downsized the number of functioning locations and increased working hours, making it imperative to operate continuously. Downtime and loss at the remaining operating facilities can now have an even more disastrous effect. All of these issues can cause additional expenditures, sometimes into the millions of dollars per day, as well as liability, regulatory fines and in some cases, closure of a facility.

There are no shortages of repercussions from lightning. In 2011, an explosion was reported in a Foxconn manufacturing plant in China. The explosion was caused when lightning struck the building, initiating a dust explosion. Hundreds of employees had to be evacuated due to airborne toxic smoke. The explosion and toxic smoke left 3 workers dead and 15 injured. At the time this manufacturing facility produced iPad2 and iPhone4; the special dust that had ignited from the lightning strikeis used to clean the screens of the iPads. This event prohibited production, causing a setback and loss not only for Foxconn, but for Apple, who were unable to meet their demand and distribution. Additional investigations by the authorities set back operations even longer, continually delaying not only production, but also shipments. Both companies were impacted financially by this strike, as they were 300,000-600,000 units short, estimated to be $1 – $3 million (€0.8-€2.4 minimum), not to mention the ensuing potential liability.

In May 2012, a Dow Chemical Plant in Pennsylvania was struck by lightning and ignited a blaze of two 250,000 pound chemical storage tanks containing ethyl acrylate and butyl acrylate – chemicals used to manufacture acrylic paints. These hazardous chemicals released vapors into the air that could potentially cause minor health problems. Fortunately, there was no spike of emergency room visits as a result of the vapors, although one firefighter suffered a heart attack and died after directing traffic during the incident. As a precautionary measure, plant employees were evacuated, schools in the area were shut down and people were advised to stay indoors. It took approximately four hours to contain the fire, slowing production.

In addition, a TPC Group chemical plant in Houston, Texas, was shut down after being struck by lightning. The strike caused the boilers to shut down, which resulted in a loss of steam feeding inside the plant. Black smoke and bright flames could be seen for miles as a result of this event. The plant has a butadiene capacity of 545,000 tonnes per year, which is used to manufacture synthetic rubber, fuel additives and other products at TCP which are integral to their offering.  The TPC Group lost valuable production and equipment.

May 2012 through August 2013, PDVSA in Venezuela experienced 15 incidents throughout all of their refineries. Out of those, three incidents were caused by lightning and several were brought about by electrical failure, arguably the potential of meantime-between- failure as a cause. The total losses were $7.7 billion for 2012…read more or click on the Tank Storage icon below to go to the magazine.

Be careful out there! Visit www.lightningprotection.com for all your lightning protection needs. Follow us on Twitter, Facebook and LinkedIn for more information and updates as well as some great photos. Thank you for visiting! Big thank you to Thorne & Derrick for hosting my blog this week.