Hacking the Planet, One Weather Phenomenon at a Time

End of the Franklin Rod Era 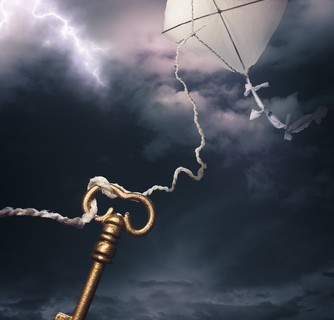 As we all know, Benjamin Franklin is widely recognized for his groundbreaking exploration of electricity and his “kite experiment.” Although, some scientists say the kite experiment never actually happened. Regardless, Franklin’s vast experiments and achievements, although classified as crazy by many in the 1700s, contribute greatly to today’s society.

Just recently, I read an interesting article from NewsWorks, titled Ben Franklin’s Kite Story Charged with Confusion. As the inventor of the lightning rod – also known as the Franklin rod, Ben Franklin’s idea rested on his understanding of electrical behavior along with an untested assumption that “clouds held electric charge and lightning was just a scaled-up version of sparks.” It was his intention to build a long iron rod atop of a steeple at Christ Church to carry out his experiment. Before it was finished, the French conducted a similar experiment and Franklin discovered he could test the same concept with a kite, a key and some string. While first experimenting with electric charges, he proposed that lightning rods would prevent lightning by helping relieve imbalance between clouds and the ground. Later, he modified that statement to say that if lightning struck the rods, it would be safely conducted to the ground. Although Franklin’s theory that lightning could be prevented was accurate – the correct method had yet to be discovered until the 1970s.

After much exploration and countless experiments, lightning rods have been used for over 200 years as conductive metal rods mounted on top of buildings and electrically bonded using an electrical conductor to interface with the ground. These rods are used to protect buildings by rerouting lightning strikes away from the structure and channeling the electricity down to the ground. Some people are under the misconception that the Franklin rod is the only way to protect against lightning strikes, and others are confused by other products developed over the past 40 years believing them to be similar to the lightning rod, such as Early Streamer Emission systems (ESE) and Charge Transfer System (CTS). While ESE’s closely resemble a lightning rod and work in much the same way, a CTS is the complete opposite. A CTS, such as a Dissipation Array™ System (DAS™) works to not allow the strike to form at all within a predetermined zone. Donald Zipse, a top scientist and researcher from the Institute of Electrical and Electronics Engineers (IEEE),Life Fellow states,

“Proof of lightning rods’ effectiveness lies mainly in empirical and anecdotal evidence. CTS technology, however, is based on existing electrical and physical formulas and mathematical basics. LEC’s patented charge transfer technology is a distinct split from Franklin rods.”

Franklin rods collect lightning strikes, conducting the charge to the ground along a preferred path. LEC’s charge transfer systems, on the other hand, are the only commercially available solutions that prevens lightning from forming within the area of protection. This difference in method – preventing the formation of lightning strikes in an area as opposed to collecting them – is especially important for oil and natural gas producers, midstream storage tank farms and energy producers of all types. These types of facilities often have flammables and sensitive materials, and conducting a charge to the ground using a Franklin rod can and has resulted in the ignition rather than prevention.

“The end may be near for the 200-year old method of using Franklin rods to collect, control and convey to earth the awesome and destructive power of lightning. The charge transfer system of preventing lightning strikes to the protected area is a valid concept and will replace the Franklin rod method.”

The CTS collects the induced charge developed by thunderstorm clouds from a designated protected area of the earth and transfers this charge through the ionizer into the surrounding air, creating a “space charge” that forms a shield between the storm cell and the protected area. The process whereby a sharp point immersed in an electrostatic field transfers charge from the ionizer into the air is known as point discharge. The resulting ionized air molecules form a mixture of charged and uncharged molecules known as space charge, which acts to form a shield between the storm cell and the site. The resulting difference in electrical potential between the protected site and the storm clouds is reduced thereby delaying the formation of an upward streamer from the protected site and preventing direct strikes.

Roy B. Carpenter, Jr., a former chief engineer for NASA’s Apollo Moon Landing Missions and the Space Shuttle design engineering teams, founded LEC in 1971 to study and apply engineering principles to lightning protection. His unique charge transfer process — the patented technology used in the LEC Dissipation Array™System (DAS™) solution – reduces the rapid transfer of electrons that occurs with lightning into a slow drip by pushing storm-induced electric charge up into the atmosphere, above a protected site.