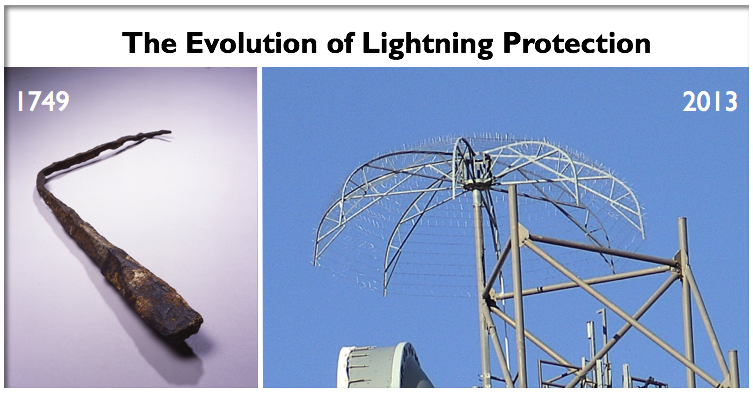 Last week I introduced the subject of new lightning technologies and why they’re needed. In part two of this series, I’m going to cover a bit about the history of lightning rod protection and offer a glimpse into the new and diverse technologies that exist.

We were all taught back in elementary school that Benjamin Franklin conducted the first lightning experiment using a kite and key in the early 1700s.  The lightning rod was born from that experiment.  Hundreds of years later, even after much exploration and countless hours of research, lightning rods are still used as a form of lightning “protection”! These conductive metal rods, which are electrically bonded, are typically mounted on top of buildings using an electrical conductor in hopes of rerouting lightning strikes away from the structure and channeling the electricity down to the ground. But the lightning rod protection is not foolproof. In fact, we believe the end of the “Franklin Rod Era” is here!

Newer technologies such as the Charge Transfer System (CTS) work to prevent lightning from forming within the area of protection. This new method – preventing the formation of lightning strikes in an area, as opposed to collecting them – is especially important for oil and gas producers, midstream storage tank farms and energy producers of all types. These types of facilities are often highly combustible, and conducting a charge to the ground using a Franklin rod can, and has, resulted in ignition rather than prevention.

The following passage is the second in this three-part blog series based on an article taken from our recent paper entitled “Attraction Versus Prevention: Lightning Protection Technology Explained,” which is available now.  You can read the entire article now or download it here to read later.

Stay tuned –  an extensive whitepaper on the subject is coming soon!

The History of the Lightning Rod Protection

The basic form of lightning protection that many people are familiar with is the lightning rod. When Benjamin Franklin first experimented with electric charges in the 1700s using a kite, a key, and some string, he originally proposed that lightning rods could reduce or eliminate lightning by relieving the imbalance between clouds and the ground.2 However, he later realized that if the conductive metal rod was struck by lightning, then it worked to safely conduct lightning to the ground. In other words, the initial confusion was an issue of prevention versus attraction. It turns out that Benjamin Franklin was correct, and prevention is indeed an option for lightning protection—but the technology would not be available for another 200 years.

Lightning rods do not prevent lightning, but instead essentially “collect” it. They attract strikes and convey the energy to the ground rather than to the building or structure that it is protecting. Lightning rods have been used for more than 200 years, mounted to the tops of buildings and electrically bonded to the ground, able to reroute lightning strikes away from important structures as a preferred strike point. They have served a good purpose, and over the years have protected many structures from the physical effects of a direct lightning strike, such as fire.

However, particularly in the past 40 years, new technologies have developed to protect against lightning—including one that takes the prevention approach that Franklin originally envisioned.