Learn Why The Houston Chronicle, RigZone and Oil & Gas Financial Journal Are Paying So Much Attention to the Risk Posed by Lightning 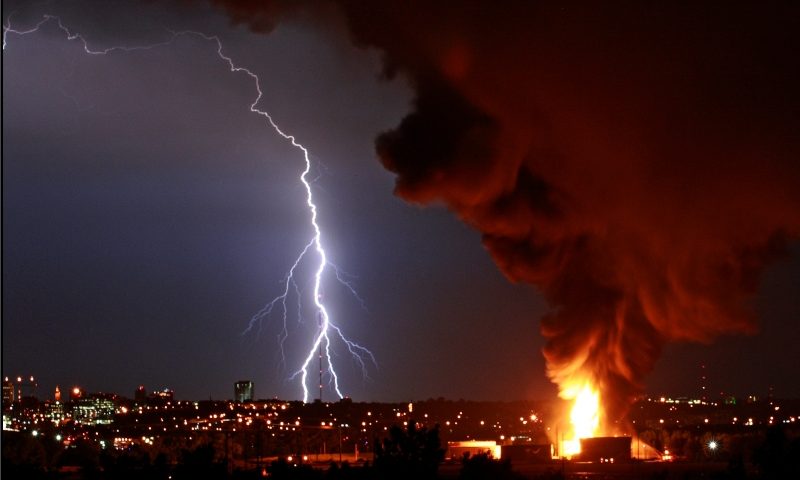 Exploration for oil and gas is leaning more on science and automation every day. Rigs are drilling deeper, platforms are stationed farther out into international waters, and sophisticated electronics dominate the machinery that runs it all. From upstream exploration to downstream refineries, pumping stations and pipelines, bigger and more expensive is the norm and growing.

With hundreds of millions of dollars in assets on the line, shouldn’t companies plan to protect those massive investments from every risk possible? The fact is, most of the time the cost-benefit analysis does not take into account intrinsic risks around oil and gas production. Some risks are obvious. However, those in the C-suite do not always focus on the need for certain precautions. More precisely, executives may not even be aware of one of the most dangerous issues and how easily and cost-effectively they can protect their assets.

Take the risk of lightning. The cost differential for protection is staggering when compared to what could be lost. Key questions to keep in mind:

Some decision-makers have thought about these questions, but lightning prevention is just not on most executives’ radar screens. It should be. According to National Weather Service officials, lightning strikes around the globe an average of 80 to 100 times per second. Mitigation is the first step to eliminating the risk.

What it comes down to largely is risk tolerance. For example, in 2008 a storage tank holding 1.2 million gallons of unleaded gasoline was struck by lightning in Kansas City. The tank, either unprotected or ineffectively protected, caught fire, resulting in hard cost losses estimated at $12 million once accounting for the lost product in the tank, the tank itself, extinguishing the fire, and facility downtime. No one had thought, or their risk tolerance wasn’t low enough, to completely protect the tank from lightning, a solution that would have cost less than $30,000 in total – on a one-time basis.

Think in terms of something more familiar on an individual level. When renting a car, purchasing insurance is always an option. For a typical $60-per-day rental, insurance coverage may cost about $20. If the Kansas City storage tank were the rental car in this example, the insurance to protect it from lightning would have cost a mere $0.18.

Other examples can be found with little investigation. A Petronas subsidiary, MISC Berhard, lost at least $40 million when one of its oil tankers was struck by lightning and caught fire in 2012 in East Malaysia. Three months earlier, a Mitsui petrochemical complex exploded thanks to a lightning strike. The total loss for Mitsui was likely much greater than the $40 million estimate after factoring in liability costs. Closer to home, refineries New Jersey and Oklahoma suffered significant financial losses from lightning strikes within months of each other in 2008.

Some costs are not always directly connected to lightning, but they need to be acknowledged when determining risk tolerance. Some “soft costs” to be mindful of during risk tolerance planning include:

In the Kansas City example, the estimate doesn’t take into consideration that the fire caused a plume of smoke throughout the metro area that was breathed by people downwind, potentially causing health issues. Those two words – health issues – immediately get the lawyers involved, resulting in astoundingly costly lawsuits.

While the confidence of the public is tested, so is that of the facility’s partners. As a result of the prolonged downtime, managers moving product from refinery to pipeline to distribution center are likely to think twice about sending all their product through the facility again. Kansas City is just one small example; the risk is everywhere.

Meantime-between-failures (MTBF) is a prominent piece of the risk tolerance puzzle that often is overlooked. According to research published by the University of Florida, a lightning strike is five times hotter than the sun’s surface and can continuously power a 100-watt light bulb for more than three months. As an indirect hit, that type of energy can still siphon off a secondary surge that may not initially knock out an electronic system, but will substantially degrade it. Instead of a useful expected life of say 10 years, a costly piece of electronic equipment may now fail in four or five years.

In 2012, the Insurance Information Institute noted that while private home insurance claims for lightning strikes were down 33% between 2004 and 2011, the total paid out by the insurance industry had almost doubled. Why? Homes are filled with more sensitive electronic devices that cannot absorb direct strikes or secondary surges. Lightning is lowering the MTBF (and not in a good way) as the voltage to power electronics is decreased with each new iteration.

An extra $1 billion in insurance losses was attributed to Nintendo’s Wii and Microsoft’s X-Box gaming systems, Apple’s iPhones, and other ubiquitous electronics. What will it cost to replace the dynamic positioning system (DP) on a vessel? What about the drilling instrumentation? Or a floating roof tank? How about the downtime while production is halted or affected while the sensitive electronics are replaced? Nearly every facet of the oil and gas industry is affected by lighting on a scale incomparable to an individual.

Lightning’s effect is far reaching, potentially in ways many may not expect. In Singapore, an expansion of a massive ExxonMobil facility was being affected by mandatory shutdowns from the region’s lightning alarm going off almost every day. Before installing lightning protection, the construction company lost nearly one full work day each week because of lightning strikes that forced crew members to a safety zone, shutting down operations.

A mining company in the Dominican Republic had a similar problem, losing the equivalent of 40 hours per worker per month due to lightning strikes. Similar to the math in our rental car insurance equation, lightning protection was a fraction of the soft cost from downtime. The mine had about 10,000 workers, so even at $1 per hour (an obviously low amount), the cost in lost production was nearly $400,000 per month when letting lightning run its course unmitigated.

Now is the time that all decision-makers should begin to look at the lightning issue in the oil and gas sector. Choose whatever protection system works best. Every structure is unique and requires a different level of protection. But failing to think about it or plan for it could mean getting caught unprotected one day. And the cost-benefit analysis will not be just a number to look past.

Do you consider Lightning when planning for Risk? If not you should!

Join us for the the First Annual Lightning Protection Summit for Oil and Gas Executives at the Petroleum Club of Houston on the evening of May 8, 2013. If you’re a senior-level oil and gas executive, you are invited to join us for cocktails, dinner, educational presentations and a Q&A session focused on the dangers associated with lightning and why protecting your assets is so crucially important.

Don’t miss your chance to learn about how protecting against lightning can greatly reduce the level of risk your company takes on. Register now to be a part of the Lightning Protection Summit, which is free to attend. Seats are limited!