Lightning Predicted to Increase by 50% by 2050- Oil and Gas Companies under High Alert!

Airplanes Get Struck by Lightning More Often than You Think 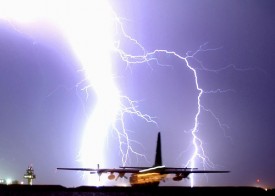 It’s been said that traveling in an airplane is much safer than driving in a car, but that doesn’t mean aircrafts are not susceptible to damage from electrostatic charges.

It has been proven that lightning actually does strike aircrafts, sometimes leaving the aircraft damaged externally and internally.

Just recently, minutes before completing a 10+ hour trek from Tokyo, a plane landing at it’s final destination in Los Angeles (LAX) was struck by lightning. It seems that a heavy thunderstorm over Southern California generated the lightning strike of the Delta Airlines Airbus A330-200. The spokesmen for Delta told the LA Times that the passengers neither reported they felt lightning hit the plane nor asked if it occurred. He went on to say that “lightning strikes to planes are rare.” The spokesmen could not have been more wrong. Lightning strikes to airplanes are very common and on average, every airliner will be struck by lightning once a year.

Although airplanes can be struck by lightning at any altitude or temperature, research shows that the higher the altitude, the more susceptible a plane is to lightning. It is also interesting to note that 57 percent of the mishaps attributed to lightning strikes to aircraft occur during the months of March through July.

In 1962, lighting hit a Pan American Boeing 707 in a holding pattern over Elkton, Maryland. The lightning caused a spark that ignited fuel vapor in a tank, causing an explosion that brought the plane down, killing all 81 aboard. This led to regulations requiring that airplanes have built-in systems that ensure that a spark will not ignite fuel or fuel vapors in tanks or fuel lines. In the 1980s, NASA completed a research project by flying a F-106B jet into 1,154 thunderstorms. It was confirmed that lightning struck the jet 637 times. Although the lightning did not directly damage the plane, it induced small electrical currents that could damage electronic systems. This led to regulations that require aircraft electrical and electronic systems, as well as fuel tanks and lines, to have built-in lightning protection.

Just like on the ground, lightning poses a serious threat and must be protected against. That is why Lightning Eliminators & Consultants (LEC) is dedicated to providing integrated lightning protection and lightning prevention products, solutions and services by utilizing innovative patented charge transfer technology, grounding systems engineering and testing and surge protection design. Providing comprehensive design, services and consulting, based on state of the art engineering principles and physics LEC has successfully installed and maintained lightning protection systems (LPS) in over 60 countries and throughout the United States for over 40 years.