Lightning Protection is Mission Critical to Operations and Sustainability 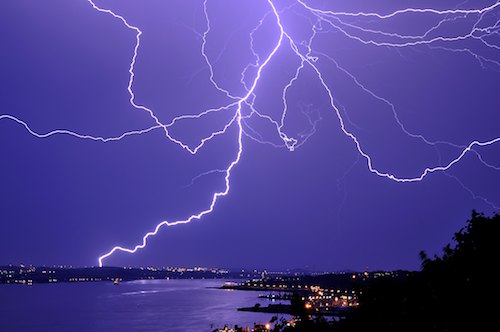 Working with hazardous materials should not be taken lightly. That is why there are an overwhelming amount of regulations for plants when it comes handling toxic materials in a safe way. But oddly enough, there are no regulations to protect these materials from lightning – the one natural event that can cause millions of dollars worth of damage, hours of downtime, and also endanger the environment and people around it. For instance, lightning struck two storage tanks at a Dow Chemical plant in Croydon, Pennsylvania. The blast blew the lids off the tanks which contained ethyl acrylate and butyl acrylate, materials used in the manufacture of acrylic paint. The ensuing fire claimed the life of a firefighter and took more than two hours to control.

This article featured in Hazardous Cargo Bulletin (HCB) outlines the risk lightning poses to storage tank facilities and how these facilities can better protect against this violent, unrelentless threat.

As the planet’s climate changes, research suggests that lightning strikes will become more and more frequent. Given the number of incidents caused by lightning strikes, perhaps it is time for storage terminal operators to ensure their tanks are down to earth

Next time you hear someone say “You have more chance of being struck by lightning”, tell them that it’s true – literally. Lightning strikes are slowly increasing in frequency as the world’s climate changes, and tank operators should be prepared.

“Climate change researchers are predicting as much as a 6 per cent increase in lightning strikes for every degree of global temperature change and in some cases lightning strikes doubling in certain areas in the next 20-40 years,” says Avram Saunders, president and CEO of Lightning Eliminators & Consultants (LEC), a specialist in lightning protection. “Lightning cannot and should not be taken for granted.

“In a study completed by Liverpool John Moores University in 2006 it was noted that lightning accounts for 61 per cent of all accidents in storage and processing activities where natural events are identified as the root cause of the incidents,” Saunders says. “According to a report by the Lloyds & Insurance Information Institute in 2011 there was a 15 per cent increase in lightning-related losses from 2009 to 2010.”

Tank fires caused by lightning strikes can cost operators millions of dollars in product loss, terminal downtime, regulatory fines, liability and damage to equipment. In extreme cases, lives can be lost too.

A tank fire caused by lightning is estimated to have cost Magellan Midstream Partners around $12m when a storage tank containing approximately 28,000 bbl of unleaded gasoline was struck near Kansas City in June 2008. A similar incident at the Wynnewood Oil Refinery, Oklahoma, in 2007 incurred a loss of around $15m, downtime of three days and product losses of 150,000 bbl of naptha, 90,000 bbl of diesel and 150,000 bbl of gasoline. As this month’s Incident Log reports (see page 15), lightning sparked a fire in a small ethanol tank at a biofuels plant in Charlotte, North Carolina, this past February; the resulting explosion damaged homes up to two miles away from the facility.

“Protecting their facility would have cost them a fraction of what they ended up spending and most importantly would have saved lives,” Saunders notes. So what can be done?

When lightning makes contact with the tank shell or floating roof, the tank structure becomes electrically charged. If the floating roof is not electrically bonded to the tank shell, its electrical potential does not change as quickly. This can trigger a potential equalising arc above the seals, where there may be flammable vapours that can ignite and cause a rim fire. The basic premise of lightning protection is installing a system that will keep the electrical potential of the tank structure the same as the earth on which it sits, which can be done in a few different ways.

“For floating roof tanks, LEC’s retractable grounding assembly (RGA) will provide a positive electrical bond between the roof and shell of the tank,” says Joe Lanzoni, vice-president of operations at Lightning Eliminators.

“To protect against direct lightning strikes to any type of tank, LEC can provide a dissipation array system (DAS) in a variety of configurations, depending on the geometry of the tank. The DAS will continuously dissipate the electrical charge that accumulates on a tank during a thunderstorm, thus preventing the termination of a strike to the tank. Each DAS is custom designed to fit the tank exactly,” Lanzoni says.

Florida-based lightning protection company Lightning Master has developed its lightning protection systems for any eventuality. “We address two common causes of ignitions in tanks, lightning and static,” says Lightning Master. “Static charges accumulate in process and flowback tanks through normal tank operations and through direct and nearby lightning activity. Since static charge dissipates from points, not flat surfaces, Lightning Master has developed an appliance (patent pending) that is installed inside the tank to equalise the potential on the fluid and in the vapour space above the fluid, and to dissipate static charge as it accumulates.

“Lightning Master streamer-delaying air terminals are designed to reduce the likelihood of a direct strike to the terminal. This reduces the likelihood of ignition from both direct and secondary effect arcing.”

“We see a growing awareness among terminal operators of the recommendations of API RP 545. With the new recommended practice came the requirement for by-pass conductors between a floating roof and tank shell. This is in addition to and supplements the historical requirement for shunts,” Lightning Master says. “By-pass conductors are simply conductors run between the perimeter of the floating roof and the tank shell at intervals not to exceed 10 feet. These provide the low-resistance path between the floating roof and the tank shell. Although shunts provide a low-impedance path, they also provide a high-resistance path. Hence, they may actually produce arcing in an area likely to contain flammable vapours.”

“Lightning protection should be installed on any tank containing a flammable material, except in locations with zero lightning. Not only will this reduce the risk of the most common cause of tank fires, but the cost of lightning protection is a fraction of the cost of the tank and its contents,” says Joe Lanzoni. “LEC’s recommendations for best practices are to first install RGAs on all tanks with floating roofs; this concept of installing RGAs on floating roof tanks is supported by API RP 545. Second, a DAS lightning protection system should be installed on or above the tank, to prevent the termination of lightning strikes to the tank.”