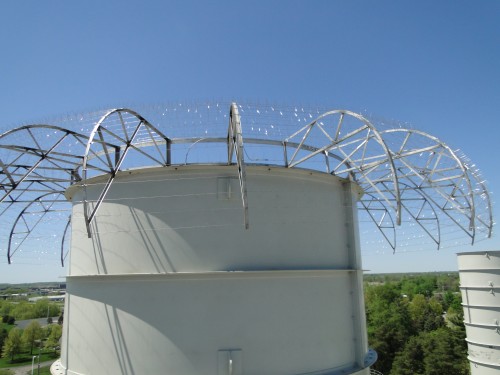 Lightning is the only natural phenomenon that can be prevented. Since 1794, when Benjamin Franklin conducted his famous lightning experiment with a key and a kite, scientists have been researching and experimenting with ways to redirect, collect and prevent lightning strikes. The lightning rod made quite a stir back when it was invented and is the most commonly known form of lightning protection. There have been a great number of technological advances in the lightning protection industry, but with those advances come many misconceptions.

One common misconception in the industry is that the Charge Transfer System (CTS) is the same as an Early Streamer Emission (ESE) air terminal. The truth is, the science and technology behind the two are on opposite ends of the spectrum. The CTS actually prevents the formation of lightning within a protected area, whereas an ESE attracts the strike – much like the conventional lightning rod – ultimately inviting the potential for damage and “mean time between failure.”  Why would anyone want to attract millions of volts of electricity toward the facility they are trying to protect, especially when you can prevent the strike from forming altogether?

The following passage is the first in a multi-part blog series based on an article taken from the whitepaper entitled “Attraction Versus Prevention: Lightning Protection Technology Explained.” which will be released in the coming months.  Over the next several weeks we will share excerpts, however you can read the entire article now or download it here to read later. Stay tuned –  an extensive whitepaper on the subject is coming soon!

When it comes to lightning protection, a common misconception is that the different types of solutions available are variations on the same technology.  This is not necessarily the case—though the process may rely on the same natural phenomena, the result is entirely different. Although the lightning rod is the most commonly known form of lightning protection, there have been a great number of technological advances since the days of Benjamin Franklin.  In addition to the antiquated technology of the lightning rod, two newer technologies are the Charge Transfer System (CTS) and the Early Streamer Emitter (ESE) air terminal.  In reality, although both of these products are used for lightning protection, contrary to the public’s understanding, they are very different.  An ESE is a similar technology to the lightning rod, while DAS is an entirely different type of technology. The only similarity is that all three initially operate off of the same scientific principle or phenomenon, known as “Point Discharge.”  However, their actions diverge; the rod and ESE move toward streamer generation whereas the CTS utilizes a slow discharge process.  Understanding the differences between these technologies is important.  For example, it might not be ideal to attract lightning in areas that are highly volatile or indispensable, but instead to prevent it from striking altogether in an area most important to protect. While lightning rods and ESE attract lightning, CTS prevents it from terminating in the area of protection.

The Formation and Effects of Cloud to Ground Lightning

To better understand these different products and their approaches to lightning protection, it is first important to have an understanding of how lightning forms.  During a storm, naturally occurring electric fields gain strength in the atmosphere.   As the storm builds, paths of ionized air, known as stepped leaders, form and head toward the earth in a sort of stepped pattern.  The electric field between the leader and ground intensifies as the leader descends, causing oppositely charged ions from the ground (or from buildings or trees, etc.) to group together, forming multiple “streamer” paths that head up toward the sky.  When the leader connects with a streamer, a lightning strike forms.  This natural phenomenon is unpredictable, and there is no way of knowing which leader-streamer connection will form.

Lightning strikes more often than many people realize.  According to the National Weather Service, lightning strikes worldwide about 100 times per second.  Many of these strikes are harmless, but others can cause catastrophic damage.  For example, in Kansas City in 2008, a storage tank holding 1.2 million gallons of gasoline caught fire after being struck by lightning, resulting in a $12 million loss.  A similar incident in 2012 in East Malaysia resulted in a $40 million loss.

The strike is only part of the problem.  The secondary surges that radiate outward from the ionic channel can also cause damage.  When these surges pass over conductive elements such as electrical wires or metallic pipes, the result may not be fire and explosions, but it can lead to the destruction of electric appliances and motors as well as more delicate electronics.  Though private home insurance claims for lightning strikes are down, the total paid out by the insurance industry has gone up—largely because of the sensitivity of common electronics to these surges.  Ubiquitous electronics such as video game consoles and smart phones have led to an estimated additional $1 billion in insurance losses.

However, the effect of direct lightning strikes on industries such as oil and gas is at an incomparable scale to these individual losses.  Potential damage comes not only from direct sources such as the loss of product and tanks as in the Kansas City and Malaysia examples (through destruction and fire), but also from downtime.  For example, an ExxonMobil facility in Singapore lost nearly a day of work each week before installing lightning protection, due to crewmembers being forced to safety zones when the region’s lightning alarm activated.  In the Dominican Republic, lightning strikes caused a mine to lose the equivalent of 40 hours per worker per month.  Other incidences include loss-time-events for offshore oil rigs and power generation stations where sensitive electronic systems were damaged.  Downtime ranged from hours to months with loss of revenue ranging from a few thousand to millions of dollars.

A cost-benefit analysis taking into account these risks is what often leads industry decision-makers to implement some method of lightning protection. However, lightning protection itself has been around for a long time, which you will learn about in the next section.