The Unusual State of a Lightning Strike

We Ain’t Got No Stinking Lightning! Ooops!

Happy 2016 to you all! Wishing you a very happy, healthy and El Niño devoid year!

First I would like to say to all of you who have been impacted by the most recent and tragic weather events I send my heartfelt sympathies and wishes for a speedy recovery. To those who lost loved ones please accept my condolences. What I have seen unfold with regard to the weather in the past months and years for that matter has been truly scary. I hope that your lives can get back to relatively normal sooner rather than later.

Weather Out of Whack!

The end of 2015 and the beginning of 2016 are turning out to be quite the monumental winter months across the Northern Hemisphere.  Winter is usually thought of as the quiet season as far as thunderstorms and tornadoes are concerned. We usually equate major weather events in the winter with cold, snow and freezing rain. They are not mind blowing, life altering storms which have been wreaking havoc across the U.S.A. producing huge deluges in places such as drought-ridden California and extensive flooding along the Mississippi River in places like Missouri and Illinois

When El Niño appears this does change, however, this year has been a little more wacky and impactful than most years, so far, and the best I hear is yet to come!  I believe that they have been calling this particular El Niño a Monster El Niño. If you google it, you can see that almost every major news organization from NBC, Reuters, Bloomberg,  L.A. Times to Gizmodo, The Loop and other smaller information resources have dubbed it so. Even Forbes has gotten in on it somehow linking The Monster El Niño with Terrorism.

Compounding this is that for years  now scientists and academics have been reporting that (which I have written about before in previous blogs)  lightning and storm events have been increasing across the globe and are expected to continue in that trajectory. Places that have not experienced lightning frequently will start to experience it more and more and places that are used to frequent lightning strikes will see stronger and more volatile storms.

Although the summer was a quandary for most on the west coast, considering the drought conditions, the number of increased lightning strikes still ignited fire after fire, dry lightning was a main culprit.  In the past 3 months since the end of October (Sat 10/24/15) we have seen the following torrential rains which plagued Texas, Arkansas and Louisiana, the majority of which were felt all across Texas inflicting the most destruction for that weather event during that time period. Of course since that time we have had bigger and more devastating storms the majority of which have been along the Mississippi River, which have had historic record crests. In addition, most recently, California got slammed again with a barrage of storms at the beginning of the New Year which produced massive rainfall, flooding and yes you guessed it, lightning. Due to El Niño this is expected to increase over the coming months. 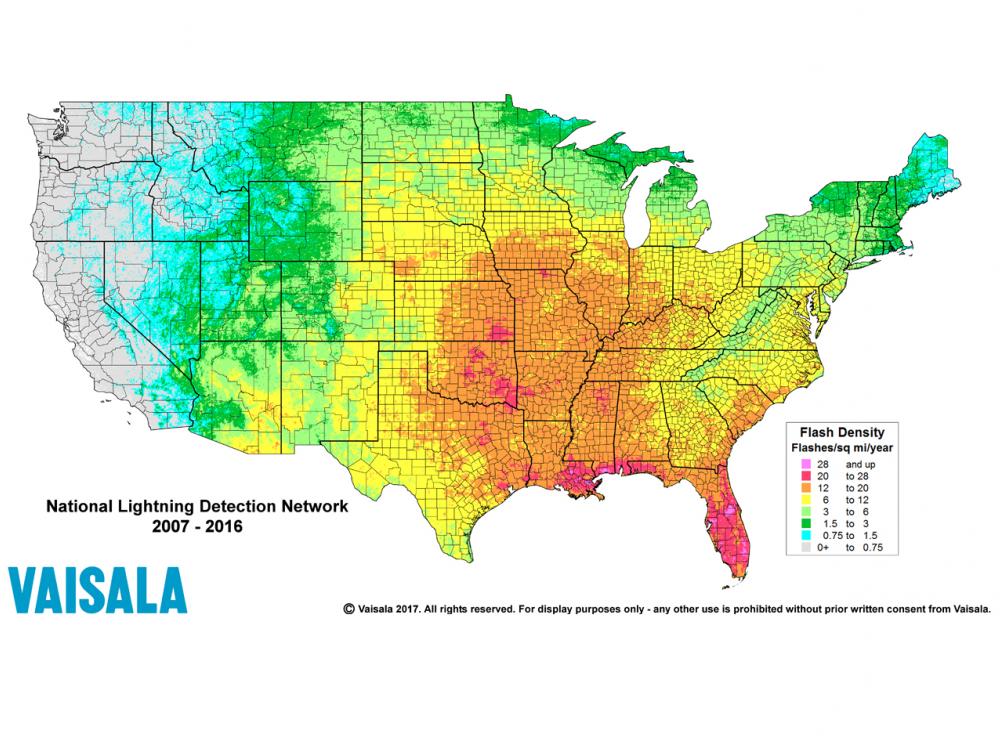 All of these storms while different in nature and scope, as well as the type of destruction which did the most damage, all had one similarity at the very least, lightning.

All of you by now must know that the temperatures on the East Coast have been exceptionally warm for this time of year. There have been some storms there as well, and they produced lightning. It is hard to believe that I am writing the blog at the beginning of Jan, smack dab in the middle of Winter. I don’t know about you all, but while I am not surprised because I have been reviewing the data for years now, I am a little nervous about all of this. Especially after reading this article from The Atlantic “The Storm That Will Unfreeze the North Pole “

Recently we have been getting more and more calls from people looking for lightning protection because insurance companies have been offering discounts and/or requiring lightning protection for home or businesses. Especially for those who have been struck multiple times.  While I will admit, it is intermittent it is starting to happen. A few years back we couldn’t find any insurance companies that even recognized lightning an insurable natural disaster, but I believe they are starting to stand up and take notice due to the circumstances.

As I have covered before, while we tend to read about accidents which are caused by a direct strike, we rarely learn of events that occur due to lightning’s secondary effects. A proper and cohesive lightning protection solution for any type of facility in any industry should include direct strike protection as well as grounding and surge solutions. If you have flammable liquids/materials as well as sensitive electronics and/or equipment your company is at risk and if you are collecting strikes into that environment, you might want to reconsider this. Have you done the math in that equation? Have you reviewed your lightning protection solution recently? Do you even have lightning protection?

In a recent survey conducted by the International Lightning Technology Institute (ILTI) I was amazed to find that out of 111 respondents, only 78% of 93% of the participants that employ lightning protection solutions, use a complete solution which incorporates lightning protection, Grounding and Surge and that 7% did have any lightning protection at all. But worse, 61% don’t inspect their systems. Wow…that is an accident waiting to happen!

You Just Won the Lottery – NOT!

The risks are becoming greater with each year that passes, especially if you have obviously combustible substances on your site. The possibility of a lightning event/accident is getting greater and greater and no longer contained to a season, as many of you have well experienced firsthand.

If your equipment/electronics are failing before there lifespan is up and you don’t know why, it is most likely the secondary effects of lightning.

Normally I would start to write these types of posts in the Spring with a focus on maintenance and inspection, however, I think with the current state of our weather affairs I need to start earlier and perhaps never stop.

If you have purchased a lottery ticket (or tickets, as most have done) in hope of winning the $1.5 Billion dollar jackpot I would like to point out that the odds of getting struck by lightning are more likely. So why then wouldn’t you put your energy energy and investment into something that is more liable to happen and create a lightning risk mitigation plan that could save thousands to millions of dollars, as well as, lives? Waiting to be a statistic is not a good practice and being proactive is a safer bet.  There are all types of different lotteries. Mother Nature’s lottery is by far the most precarious…Win this one!