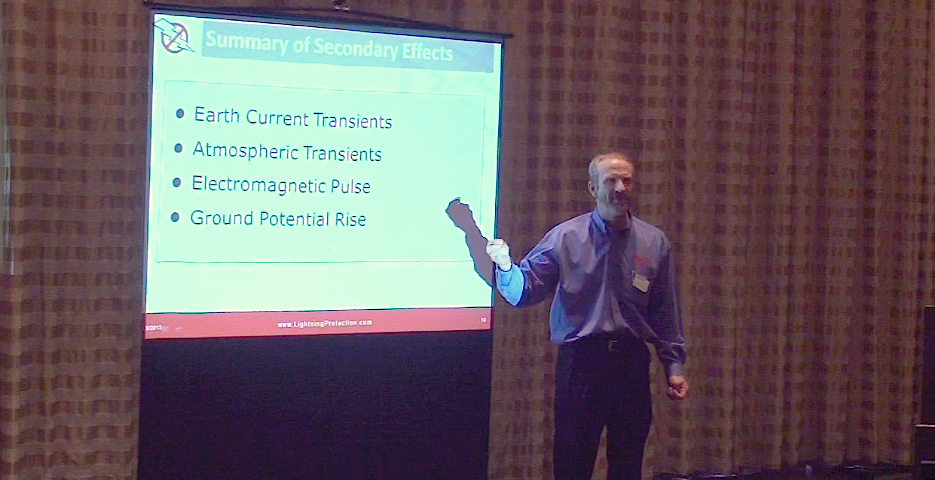 Last week Houston was crowded with oil, gas and energy executives from all over the world for the Offshore Technology Conference. A small contingent of these executives took time out of their busy schedules to attend the First Annual Lightning Protection Summit for Oil and Gas Executives, administered by Lightning Eliminators & Consultants at the storied Houston Petroleum Club, where billions of dollars’ worth of deals have been brokered in the industry.

This educational dinner event, overlooking the Houston skyline, led attendees through intimate discussions around the facts about Earth’s changing weather patterns and the effects they have on the oil and gas industry.

The Summit began with opening remarks from Lightning Eliminators CEO Avram Saunders and was followed by a scientific presentation by Dr. Al J. Gasiewski, professor at the University of Colorado of findings and research by Dr. Earle Williams of MIT. Dr. Gasiewski opened the eyes of many attendees by sharing the most recent research and data related to the increasing frequency and intensity of lightning strikes across the globe.

Over the past several decades we’ve seen surface temperatures steadily increase across the globe. Most of this warming has occurred since the 1970s, with the 20 warmest years having occurred since 1981 and with all 10 of the warmest years occurring in the past 12 years. What does this mean for lightning? The answer is somewhat alarming: for each degree Celsius of warming, we’re seeing a 10 percent increase in occurrences of lightning.

We also are now seeing a marked increase in occurrences of lightning in places where it hasn’t been prevalent before. Oceanic lightning activity and lightning at high northern latitudes is on the rise. Many regions around the world that historically have not experienced much lightning are beginning to see more events. This is proof that we cannot rely on history to indicate what the future holds in terms of weather patterns.

Tank Fire in Fort Worth, TX caused by lightning

I had the honor to present the scientific principles behind lightning and how it works.  As a group, we explored the history of lightning protection and different technologies used over the years from Benjamin Franklin’s lightning rod to the Charge Transfer Technology developed by Roy Carpenter, who served as a Chief Engineer for NASA’s Apollo Moon Landing Missions and the Space Shuttle design engineering teams.

The presentation also examined best practices and how companies can use lightning protection solutions to safeguard assets from devastating losses. Companies that have not sufficiently and proactively protected against lightning have become acutely aware of the costs associated with one strike. Case in point: just recently there were three oil tank explosions in the Gulf Coast region within a two-week period, all of which were caused by lightning strikes. In years past, ten to fifteen tank explosions per year globally was the norm. Throughout our 41-year history, LEC and our associates have not seen this many tank fires cause by lightning in such a short period of time in the Gulf Coast.

Being aware of the options that exist to protect against such devastation and loss is the first step in doing something about it. That’s what the Lightning Protection Summit was all about. In fact, our attendees were so compelled by what they had learned that many stayed after the event was officially over in order to personally meet with Avram, Dr. Gasiewski and I to ask questions. They sought information about their companies’ specific needs for lightning protection, and we were thrilled to help them understand more about it.

Among the participants who offered feedback was Abather, Al-Juboori, Chairman of Ability with Innovation (AWI), an Iraqi-owned workforce solutions, equipment rental & maintenance, procurement and construction services company. According to A-Juboori, “The summit was great. The presentation allowed me to gain deep knowledge on lightning patterns and lightning protection systems.”

We are already in the planning stages for the Second Annual Lightning Protection Summit and are excited about the future. Visit www.lightningprotection.com for more information on lightning and lightning protection best practices.