Lightning Protection is STILL Mission Critical to Operations and Sustainability- Don’t let Your Guard Down!

To Strike or Not to Strike, that is the Question: Is there more lightning or am I imagining it? 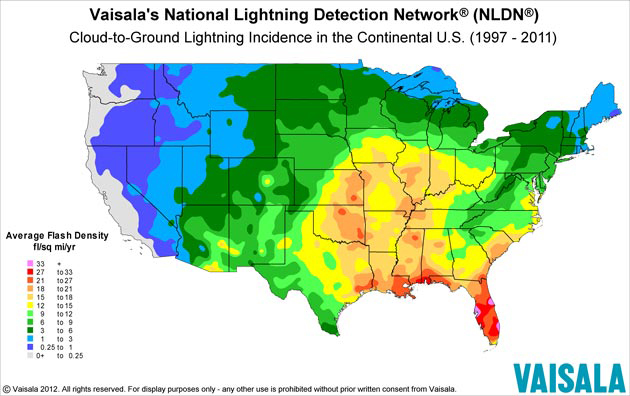 For the past year myself, my colleagues at Lightning Eliminators, and our customers have noticed what appears to be an increase in lightning all over the world. Places that did not have much lightning before seemed to have more storms and places that usually had frequent lightning events, started to get pummeled by more volatile and frequent strikes. It started last year when we noted more lightning across the UK and Europe. Than Australia, which is known for heavy storms was inundated with much stronger and more deadly storms. We mentioned this to some of our scientists across the country who said that the data did not support this. So we pushed it aside as an anomaly since there was no scientific data. Then this spring we noticed that places such as the Gulf Coast which does have frequent lightning events started to get them earlier. Not only did they start sooner but they were increasing fierce and unrelenting, a subject which I wrote about in May “Three Lightning Strikes Hit Three Storage Facilities in Nine Days: The Oil and Gas Industry has a Big Bull’s Eye on its Back!” Tank Storage facilities were getting struck left and right as covered in an additional blog on August 8th, “Lightning Blowing Up Oil and Gas Production Across America” , not only across the Gulf Coast, but in places like North Dakota, which historically did not have a lot of lightning. States like Oregon, Maine and New Hampshire were reporting some of the heaviest storms they had ever experienced. The State of Washington  also chimed in throughout the summer and into the fall.

Again we reached out to our scientists to confer what was obviously an increase in lightning events. Much to our surprise we received the same answer. The data is not supporting this. However, this time they had to admit that they too were flummoxed, because independent studies were showing otherwise all over the country, however, not the systems or science that they use to measure weather.

Last week the New York Times published an article “Study Sees a Higher Risk of Storms on the Horizon”  which again disputes the data which scientists are using to measure increased lightning? All of us are a little confused.  We see it, the customers see it, other studies see it, but just not the scientists.

Although I cannot base our experience in science, I feel completely comfortable stating that lightning is increasing and becoming much stronger. Perhaps the scientific community at large is not ready to support this theory; however, studies and observation all over the world are leaning in that direction. If it walks like a duck and quacks like a duck, the odds are it is a duck. We certainly do not ignore the information our scientists provide to us, in fact, we are paying close attention to it. However when our own scientist start to become confounded by contradictions, myself and my colleagues certainly feel more comfortable with our assertions that lightning is increasing.

Industry needs to pay close attention to lightning. In addition start to plan and prepare to protect their facilities, not only from a direct lightning strike, but also the impact of lightning’s secondary effects.  Millions are lost each year from unknown damage to facilities.

According to the New York Times piece referenced earlier starts out “The eastern and central United States likely will see a greater risk of severe weather by the middle of this century as rising temperatures trigger atmospheric changes that favor storms, a new study by climate scientists from Stanford and Purdue university’s concludes.” Sighting a 42% increase by the last 30 years of the century according to the study (read more). If you are in any industry that deals with electronics, power and/or flammables not preparing would be irresponsible. If you have any questions or would like to contact the LightningDiva@Large please email LightningDiva@lecglobal.com.